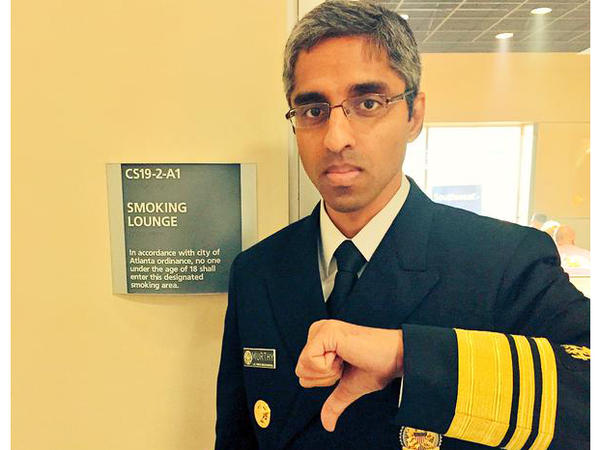 (Note: Story/audio updated to include comments from U.S. Surgeon General and Hartsfield-Jackson Atlanta spokesman.)An updated audio version of this story 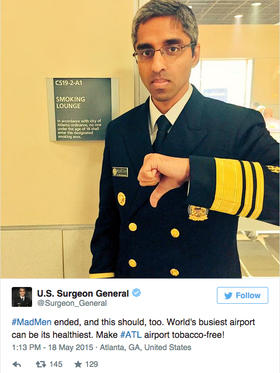 The U.S. Surgeon General has called on the city of Atlanta to make Hartsfield-Jackson Atlanta International Airport completely smoke-free.

Currently, smoking is allowed in designated smoking lounges in each of the airport’s terminals.

A tweet, posted by Dr. Vivek Murthy, shows him standing in front of an airport smoking lounge sign. His face is stoic. His thumb points down. The tweet reads: “#MadMen ended, and this should, too. World’s busiest airport can be its healthiest. Make #ATL airport tobacco-free!”

“In every way, my experience at the Atlanta airport has been fantastic. It’s a world-class airport,” Murthy tells WABE.  ”Which is why this smoking lounge really surprised me, because it’s something out of the Mad Men days and I know we can do better.”

Airport spokesman Reese McCraine says there are no plans to eliminate the smoking lounges. “These lounges are common at many airports around the world and our customers who smoke enjoy the convenience of multiple locations throughout the airport,” McCranie said via email.

City of Atlanta spokeswoman Anne Torres says Mayor Reed will take the tweet under consideration. She points out that as a state senator, Kasim Reed helped pass the Georgia Smokefree Air Act of 2004. That legislation excludes International airports.

Atlanta’s airport has more than a dozen designated smoking lounge in each of its seven terminals. They came out of an agreement between the city and cigarette maker Philip Morris, who in the early 1990s gave the city $250,000 to build them. The city, however, is responsible for maintaining the lounges – including their ventilation systems.

A CDC report found those systems do not eliminate second-hand-smoke exposure.