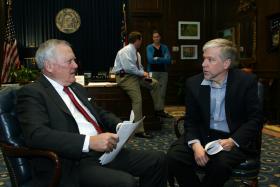 Governor Nathan Deal (R-Georgia) promised his proposed budget will see the biggest increase in spending on K-12 education since the 2007-2008 fiscal year.

In a conversation with WABE’s Denis O’Hayer, the Governor also talked about the state’s troubled child welfare system; the fight over Medicaid expansion; a proposed change in the state’s medical malpractice claims process; and the calls for a statue of Martin Luther King, Jr. at the front of the State Capitol.