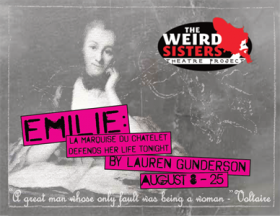 The Weird Sisters is a theatre project helmed exclusively by women, working together to elevate the role of women in Atlanta theater and bring new work to the stage. Their current production, titled Emilie: La Marquise Du Châtelet Defends Her Life Tonight, is opening this week at the Aurora Theater in Lawrenceville and WABE’s Myke Johns spoke with those involved.

Veronika Duerr says there is kind of a revolution going on in the American theater community right now.

Duerr is co-founder of The Weird Sisters Theater Project. The project is comprised of five women and is based out of Atlanta’s Shakespeare Tavern.

“And it’s funny because it happens just about every twenty years,” Duerr says, “they go ‘Hey! Women aren’t getting a whole lot of work. We should do something about this.’ So one of the major goals was to employ as many women as possible into power positions, meaning that the producers are females, the directors are females, we try to do plays written by females.”

Producer Jaclyn Hoffman says her involvement came from a desire to work with more women. She says she and Weird Sisters producer Kelly Criss rarely got to do shows together working at the Shakespeare Tavern. “There just aren’t as many female roles” Hoffman says. “So, we decided why not make it happen ourselves!“

It may not be the universal experience of female actors in Atlanta, but Veronika Duerr says that in her decade-plus of acting in Atlanta, she has been lucky to be directed by a woman “maybe three times in ten years?”

The Weird Sisters’ current project is called Emilie: La Marquise Du Châtelet Defends Her Life Tonight, written by playwright and Atlanta native Lauren Gunderson. Emilie is a real historical figure; a mathematician, physicist and writer during the Enlightenment. She’s known for her translation and commentary on Issac Newton’s Principia Mathematica—the book where Newton put forward his laws of motion and gravity. That translation, published after her death, is still used in France today.

“She is a fascinating woman.” Gunderson says. “When I think of her, I think of a woman who would fit really well in modern times. Whatever she wanted to do or thought she could do she tried, and often succeeded.”

Veronika Duerr is playing Emilie in the show, and says the physicist went for years where people denounced her and refuted her work.

“Every woman should know who this woman was. She changed the face of science,” says Duerr.

Gunderson characterizes Emilie as someone who both epitomized the era and defied it being a woman.  “So I feel like she needed a raucous play to deserve her true story.”

And the Weird Sisters have obliged that raucousness, promising a costumed comedy and drama closer to Lady Gaga than Masterpiece Theater as Emilie looks back at her life and her work and ponders out those existential questions—what did it mean? Did my life amount to anything?

That theme of self-examination and aspiring to worthy goals hews close to the Weird Sisters mission.

“I wonder that all the time because this means so much to me,” Duerr says. “I will always audition, I will always do other projects, but at this point now, I would like to build something that is mine.”

“I think what we’ve come across in the last couple decades … well, the last couple hundred years if you’re paying attention to women in theater…” Gunderson chuckles, “is that Hamlet is not a play about a man, it’s a play about everyone. But plays with female leads are often ‘female plays.’ And what we’re trying to do is say the story of Emilie du Chatelet is everyone’s and it is a play that can be funny and brassy and sexy and profoundly moving no matter what gender you are.”