If Stone Mountain had an official troubadour, his name would be Tony Taylor.

More than 825 feet above ground, on the largest exposed granite rock in North America, 62-year-old Tony Taylor is a fixture.

Like clockwork, the accidental entertainer and Stone Mountain native hikes the mile up the mountain every 48 hours – all while singing and playing his Carlos acoustic guitar.

“Lots of people walk up with instruments and play them at the top,” Taylor said. “But I actually sing and play guitar as I walk, which you know is kind of amazing to some people, especially at my advanced age.”

Taylor was first drawn to Stone Mountain more than 21 years ago after a difficult divorce.

“Initially I was just looking for a place to go practice my guitar,” Taylor said. “And the easiest place I could find was kind of off the trail in the woods. I could sit on a big boulder and just practice. And so over the years, I’ve just eventually ended up closer to the people because they would hide around me and applaud when I would finish and I didn’t know anybody was listening.”

There are dozens of videos of him online playing his guitar.

He plays music from R.E.M, Bob Dylan, Neil Young, but he said his favorite might be Adele.

“She kind of, you know, paralleled a lot of my feelings,” Taylor said. “Those songs she writes that are really well received are the ones after she broke up with her boyfriend. And I had had a big breakup.”

Taylor’s day job is fixing up homes in the Stone Mountain area. In the summer, you’ll find him shirtless with a baseball cap that says PLUM Tony.

“When I was a teenager I noticed that countries appoint poet laureates and I didn’t have a country to appoint me, so I appointed myself Poet Laureate of Universal Man,” Taylor said.

He said he’s not seeking fame and all the attention makes him uncomfortable, but he naturally draws a crowd.

Robert Berta was only a first-time visitor to Stone Mountain from West Virginia, but he quickly became a fan of Taylor’s music. 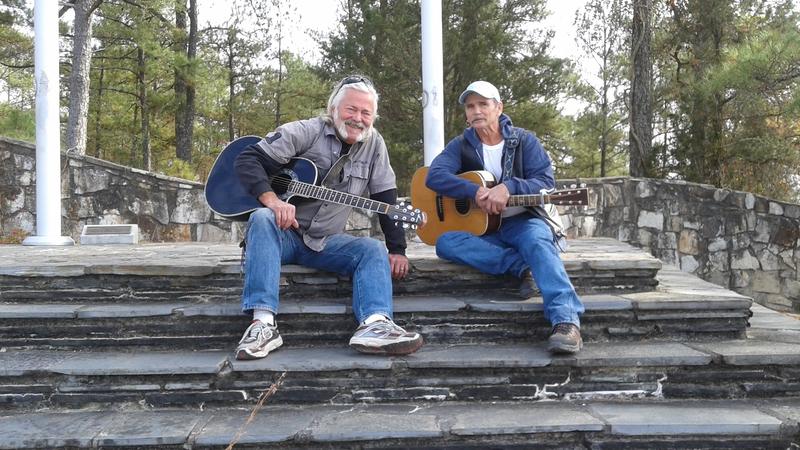 He rested at the bottom steps of the flag porch with his wife, Melva Shrewsbury. She said she enjoys Taylor’s version of the songs.

“We tried to get up to the top but we stopped because it was too steep,” Shrewsbury said. “But this is nice to have him sing and playing music on the way back down.”

The mountain attracts people from all over the world and, for Taylor, it’s what he leans on.

“It’s something that is not going to go away. It’s a rock. And it’s a big darn rock,” Taylor said. “Although everything around it changes constantly, the rock essentially stays the same. And it holds a lot of quiet places to just sit and think.”