The Atlanta-based Centers for Disease Control and Prevention said this week certain people who are HIV-negative should take medication used to treat those who are HIV-positive.

The concept is called “PrEP,” for Pre-Exposure Prophylaxis.  Many say it’s the closest thing yet to a cure for HIV.To hear the audio version of this story, click the “Listen” icon above.

Even so, PrEP remains controversial, even in communities highly affected by the virus.

That doesn’t faze 4o year-old Eric McCulley, who is gay and HIV-negative. 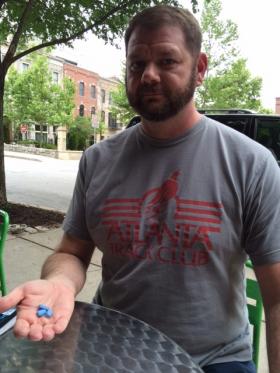 Outside a coffee shop near Atlanta’s Glenwood Park, he pulls out a baggie with a few blue pills.

“They’re a decent size, actually,” he says of the medication. “Some people might call them a horse pill.”

The pill is Truvada, a combination of two drugs used to treat HIV.  Despite Eric’s negative HIV status, he takes the drug daily.

“I am on day 27,” he says.  “It’s been great. There’s been no change, except in my attitude. I have what I was looking for. I have peace of mind. I feel like I’ve taken responsibility for my health.”

Eric had an upset stomach for the first few days of treatment, but it’s since gone away. Most others on the drug report minimal, if any, side effects.

Truvada has been on the market for a decade. Two years ago, the FDA approved it as an HIV-preventive. The CDC this week followed with the strongest support yet for PrEP when it issued guidelines for its use.

But a lot of questions surrounding its preventive use remain.

At a town hall meeting Thursday night at the Phillip Rush Center, members of Atlanta’s lesbian, gay, bisexual and transgender communities had the chance to get answers about PrEP.  It was sponsored by Team Friendly Atlanta, a group whose mission is to reduce HIV-related stigma. 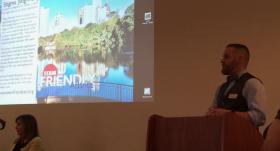 “PrEP is the closest thing to a cure that we have,” says one presenter, but reminds the crowd that it’s not a cure.

A large-scale study found Truvada is up to 92% effective when taken daily, but much less effective if taken inconsistently.

Despite its promise, acceptance is minimal.  One report shows about 2,300 people in the US are on PrEP therapy.

Dr. Colleen Kelley of Emory’s Division of Infectious Diseases says not many in Atlanta are currently on PrEP.   But she says she’s hearing more people ask about it, and expects the just-released CDC guidelines will help boost numbers.

Even within the LGBT community, another barrier is at play: stigma.  Some feel PrEP is a stamp of approval for promiscuous behavior,

On a 2012 TV show, Tom Myers of the AIDS Healthcare Foundation said “35% of those [gay men who] said they might be interested in taking PrEP also indicated they’d decrease condom use.”

The foundation’s president, Michael Weinstein, labeled those who take the regimen as “Truvada Whores.”

Panelists at the Rush Center say they’ve not encountered that stigma. But Dylan West, who’s been on PrEP for a year-and-a-half, says many in the medical community don’t understand the concept.

West gives the example of a recent ER visit. It was unrelated to PrEP, but the physician kept asking questions about his HIV exposure.

Cost can also be a barrier. Truvada can run $14,000 a year. Many insurance plans cover it, but often with high deductibles.

Jeff Graham, executive director of Georgia Equality, tells the crowd he remembers when protease inhibitors came on the market in 1996.  They also faced criticism from people who said they were too expensive and that the public health system will never be able to afford them.

But cost is a concern the healthcare system will have to address, especially as more people embrace PrEP. Some states approve it on their Medicaid formulary; others do not.

But Colleen Kelley, the Emory doctor, says she approaches the cost question in a different way:

“I think for me, it’s just incredibly simple,” she says.  “If there’s an effective prevention method, people should be able use it. Period.”

Although PrEP is considered a viable option for many at-risk of contracting HIV, researchers say it’s not for everyone, and that anyone who wants to begin the treatment should first find a qualified and experienced health provider.