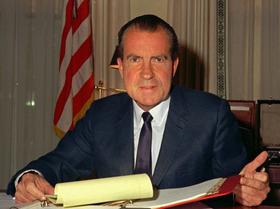 The University of Georgia libraries have improved access to more than 30 hours of videotaped interviews with former President Richard Nixon.

The university says the videotapes had been largely unseen outside of the group that produced them in 1983.

The videos were donated to the UGA libraries nearly 15 years ago by Jesse Raiford, president of Raiford Communications, who said he wanted them to be housed at an educational institution that would make them accessible to the public.

The interviews, including full transcripts, are online. Ruta Abolins, director of the Walter J. Brown Media Archives and Peabody Awards Collection, says the videos constitute an oral history of his life, from his childhood to his decision to resign as president.