A group of Venezuelans living in Atlanta held a protest in Buckhead this weekend. They want to highlight ongoing anti-government demonstrations in their homeland.

The group isn’t happy with the Venezuelan regime, led by President Nicolas Maduro. And some say conditions there keep them from returning home. However, that has created an internal conflict for some Venezuelan nationals here.

Rain and cold weather likely suppressed turnout, but a about ten protestors weren’t deterred by the gloomy conditions. The small group of Venezuelan nationals stood at the intersection of Peachtree Street and Lenox Road. Most, like Linda Lopez, held up signs and flags, in solidarity with protestors in Venezuela. 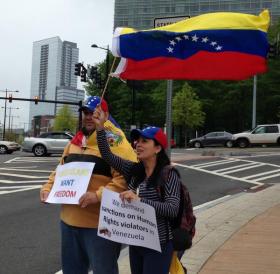 “We need the support of the American people,” Lopez said. “This country’s founded on civil liberties and human rights, and that’s all we’re asking in Venezuela right now.”

Students initiated the protests in Venezuela over two months ago. They blame the government for soaring inflation, high crime, and a shortage of supplies. The government denies it’s to blame, and has even accused the U.S. of instigating the protests.

The conflict is taking an emotional toll on Venezuelans here. Many, like Ingrid Ramirez, still have family in Venezuela.

“We’re lucky to be here because we are safe, but it’s hard,” she said. “It’s hard knowing what’s going on way over there and you cannot be with them, it’s hard. You can just pray.”

Pictures and videos depict violence by both sides. But those who support the demonstrators say the government has used excessive force to control protestors. More than 40 protestors have reportedly died.

Those images worry Venezuelans like Zarelda Hazel, who also has family in the politically torn country.

A Different Kind of Guilt

Ana Gonzalez* is a certified court interpreter and law student. Her father is Venezuelan; her mother is Spanish. She was born in Atlanta, but grew up in Venezuela. Most of her family is there.

Over lunch in Woodruff Park one day, Gonzalez says she has a lot of feelings about the conflict in Venezuela, including guilt.

“I felt like I should be there doing more and I wasn’t and these people were taking the brunt of something that was going to help the country, and help my kids, my future kids, and my future grandkids,” she said.

Some have described their feelings as “survivor guilt.” The term typically applies to those who’ve survived a tragedy, such as the typhoon in the Philippines, where many people died.

Dr. Nadine Kaslow says the ongoing political crisis in Venezuela is different, but Venezuelans here could still be experiencing something similar to survivor guilt.

“I think it’s a reasonable expansion of the definition,” she said.

Kaslow is a professor and vice chair of Emory’s psychiatry department. She’s also the president of the American Psychological Association. She says feelings of guilt and sadness are common in crises.

“Part of it is about allowing yourself to have those feelings, to realize they’re normal, they’re understandable, and to be able to process them and talk about them and then over time, the issue is to be able to work through them,” she said.

That could include support groups or individual therapy, she said.

At the Buckhead protest, there’s chatter, honks of support, and some signs of optimism. Ingrid Ramirez says she has to believe things will get better eventually.

“That’s why I’m here,” she said. “If I did not think that’s not a possibility, I would not be here.”

But how and when that might happen is uncertain. So, in the meantime, many Venezuelans here are trying to bring attention to the issue, while they hope and wait.

*WABE is not using the subject’s real name to protect her identity.