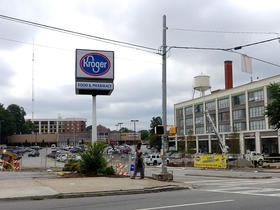 Along with trumpeting some upgrades to both the interior and exterior, management will try to shed a rather ominous nickname that’s stuck for more than a decade: Murder Kroger.

Likely named after a woman was shot and killed in the parking lot back in the early 90s, the store even inspired a song by the local band Attractive Eighties Women.

But Kroger thinks with the changes, it should get a new nickname.

“We’ve made changes that include a bicycle/pedestrian ramp that connects directly to the BeltLine, there’s new landscaping, new curbs and sidewalks.”

Though Jenkins insists the reopening isn’t a rebranding effort, store officials are pushing the BeltLine Kroger nickname, including in a press release about the Wednesday event.

To Mack Williams, who wrote the song “Murder Kroger,” you don’t get to choose a nickname.

“It’s just like if you’re in Junior High and you have nickname that you don’t like, and you try and give yourself another nickname, none of your friends are going to call you by the new nickname that you picked that you like,” he says.

But walking along the BeltLine right by the grocery store, residents seemed more optimistic, pointing to the luxury apartments and new stores that have sprung up along the trail.

“I think with something as vibrant as the BeltLine and right here beside Ponce City Market that it will be possible for Murder Kroger to shake its bad name,” says Laura Reese, who’s lived in Atlanta for 20 years.

Lisa Bengoa used to live by the Kroger and says in the past she never felt safe walking near the store.

“I guess if the community changes and the patrons change and the business wants to change it, I’m hoping for the best,” she says.

Manon Herzog, a brand specialist with the Atlanta-based Davis Brand Capitol, says it’s possible to shake the nickname, but it’s not going to happen overnight.

“You cannot just make the decision to call it something else and it will all go away,” she says. “You will actually have to back it up with actions as well.”

Herzog says it all depends on how the neighborhood develops and that Kroger’s taken a good first step by trying to align itself with the BeltLine.

But whether or not the name change does stick, Atlantans will still have the song “Murder Kroger” to hold on to.