Beekeepers are still losing honey bees to colony collapse disorder. Though the crisis isn’t as bad as it was just a few years ago, the U.S. Department of Agriculture says it’s still bad enough that beekeepers are not able to recover what they’ve lost. So scientists are looking to use other kinds of bees to help pollinate crops. They have plenty to work with: there are more than 4,000 species of bees native to North America.

Joe Dickey has been growing apples in his McCaysville, Georgia orchard, near the Tennessee border, for more than 50 years. He bought the property when he was 17 with money he saved from shining shoes. He raised his family here, worked at the copper mine nearby until he retired, and now focuses on the farm.

“We’ve got a couple thousand trees now, we got 16 varieties of apples,” he says while picking Gala apples. “Planted every tree with a shovel.”

One thing he doesn’t have to do at Mountain View Orchards is rent honey bees.

Farmers need bees to pollinate crops like apples, almonds and melons. So many orchards hire professional beekeepers to bring in hives, sometimes hundreds of them, holding millions of bees.

“I didn’t know I didn’t need to, because everybody else was using them,” Dickey says. In the past, friends have kept honey bee hives at his orchard, so he hasn’t had to pay to rent them.

But he didn’t even need those, because his orchard is swarming with wild bees. 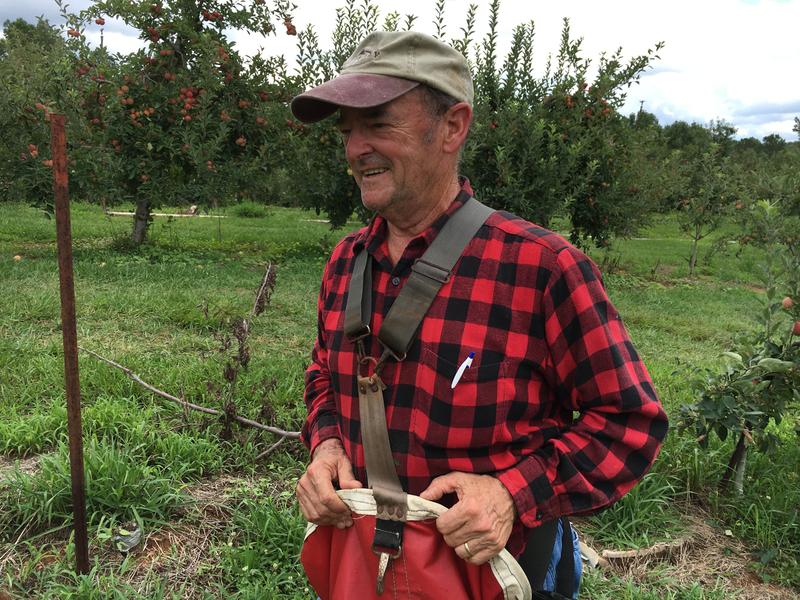 “The first time I came here during bloom was eye-opening for me,” Stewart says. “Just pulled up in here, and it looked almost like the entire orchard was kind of on fire a little bit, was smoking a little, like a faint black mist. Get up in there and you actually realize, it’s not smoke. It’s just thousands and thousands and thousands of bees, and they’re all native.”

Stewart has found more than 200 species of bees in North Georgia apple orchards. Dickey’s orchard alone has about 150 species.

One, a kind of mining bee called Andrena crataegi, basically has its own bee city in the ground under Dickey’s apple trees.

“These mining bees, they live in massive, massive communes,” says Stewart, pointing towards one end of the orchard. “There’s one over there that’s probably a football field long, and every spring there’s tens of thousands of them, and every spring they are the principal pollinator of our apples.”

Stewart is working with Georgia Gwinnett College professor Mark Schlueter to bring even more wild bees to this orchard. They’re planting wildflowers to attract and feed the wild bees when the apple trees aren’t in bloom. When the trees do flower, they hope the bees will already be here, ready to get to work.

“What we have right here is this wildflower patch,” Schlueter says, walking along a field of yellow, purple and white flowers. “A whole island of flowers.”

Everything is in bloom and vibrating with bees.

Crouching down on the edge of the patch, Schlueter starts identifying bees. 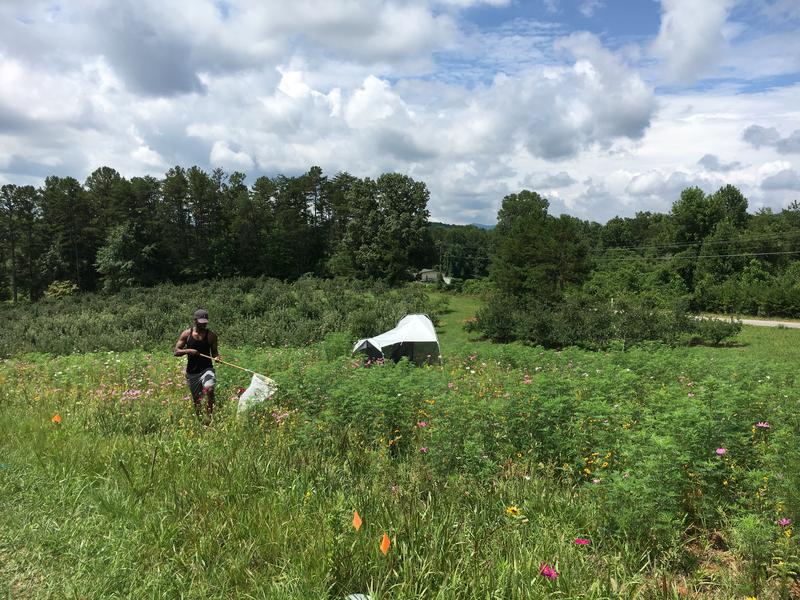 “You can see just in a small area, we’ve already seen over a dozen species,” he says.

There are bumble bees, carpenter bees, a bright emerald green one with black and yellow stripes that’s a kind of sweat bee.

There are similar projects in other parts of the country, as researchers and farmers look to decrease reliance on honey bees. The scientists say this research isn’t about replacing honey bees, it’s about helping them out, having a backup plan, and supporting the wildlife that’s been here all along.

“If you were investing financially, it’s pretty dangerous to invest in one thing, right, and so people try to diversify their financial portfolio,” says University of North Dakota professor Mia Park. “This is the same idea, that our agricultural system has really invested in one pollinator for the last few decades in honey bees.”

In some cases wild bees are more efficient pollinators than honey bees. Park says the wild native bees have actually been helping out on farms all along, it’s just that most people weren’t paying much attention to them.

In places where there are massive farms with very little else around them, like in California’s Central Valley, it is harder to attract and maintain wild bee populations. Unlike in north Georgia, where forests are mixed in with the farms, there aren’t natural areas where the bees can live – though the U.S. Department of Agriculture is now studying using wildflowers to attract bees in some of California’s big orchards too.

And even though colony collapse disorder only affects honey bees, there are other challenges to native bees, including disease, pesticides and habitat loss. The federal government just moved to protect several bee species in Hawaii – the first time bees have been added to the Endangered Species list. The U.S. Fish and Wildlife Service is considering protecting another species, the rusty-patched bumble bee, which used to live in northwest Georgia.

“It’s not like you can just plug in a wild bee and expect them to be healthy,” says Diana Cox-Foster, a bee expert with the U.S. Department of Agriculture.

Still, relying on the native bees has worked so far for apple farmer Joe Dickey. This is his first year without honey bees.

“It’s good, as good a crop as I’ve ever had,” he says. “I think maybe that’s due to not as much frost, plus the pollination, but I’m real pleased with my crop this year.”