As children, many of us are taught that life just isn’t fair. And as adults, it will often seem true. We’re faced with unfair situations all the time. 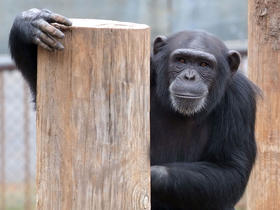 But why do we care so much about fairness in the first place?

According to an Atlanta primatologist, we might look to another species to find the answer.

Producer Stephannie Stokes talked with Frans de Waal, C. H. Candler Professor of primate behavior at Emory University and director of Living Links at the Yerkes National Primate Research Center, about his research on primates and fairness to bring us this story.

About a decade ago, Dr. de Waal and a Georgia State University professor Sarah Brosnan noticed something in the behavior of their Capuchin monkeys. In their experiments involving tasks and rewards, they saw that the monkeys weren’t just focusing on the reward they received for the work. They were also watching what the other monkeys were getting as rewards.

“They shouldn’t be doing that,” Dr. de Waal said, “They should only care about how much work they put in and what they get for it.”

So, to figure out what exactly was going on, the two professors set up an experiment to test how the monkeys would respond if they received different rewards for the same task.

The experiment was simple. Researchers would throw a pebble into the monkey’s cage and its job would be to bring it back. As soon as the monkey did that, it would receive a reward.  Dr. de Waal shared a video of this fairness experiment in a recent TED Talk:

You’ll see that in the beginning both monkeys get cucumbers as a reward. While Dr. de Waal said cucumber isn’t the most appealing reward for monkeys, it’s good enough for them to do the work.

But then the researcher switches the reward for one of the monkeys. Instead of receiving a cucumber for the task, that monkey will get a grape, which, it turns out, is a much better reward in the eyes of these primates.

As soon as the researcher does this, you see the monkey who is stuck with the cucumber start to act very differently. It becomes agitated and even throws its reward back at the researcher.

“Which economists have sometimes called an irrational response,” Dr. de Waal said, “in the sense that cucumber is better than no cucumber. Or, let’s say, if you get a $1,000 and I get $2, I may be upset about that but $2 is still better than no dollars and so I should be happy to accept them.”

But Dr. de Waal said, for monkeys, this kind of behavior actually makes sense. They’re cooperative animals and, when you’re constantly working together, you have to be aware of what your peers are receiving and know if they’re getting a better deal.

For that reason, you’ll see these kinds  of reactions in the behavior of other animals who cooperate, like dogs, crows and, yes, humans too.

Indeed Dr. de Waal said the same experiment has been done with very young children and the resulting behavior is very similar to what you see from the Capuchin monkeys in the video above. For Dr. de Waal, it is no coincidence. This is where he thinks we developed our sense of fairness.

But there is another part of our understanding of fairness that you won’t see in monkeys or dogs. For this fuller sense of fairness, you can’t simply be upset when you’re the one getting less. You also have to care when you’re the one receiving more. This takes a higher level of cognition and, aside from humans, Dr. de Waal has only seen this behavior in apes.

“The chimpanzees may refuse a grape if the other one doesn’t also get a grape. So they want to equalize the outcome,” Dr. de Waal said.

Ultimately, he said this behavior helps avoid conflict. And if you think about it, it makes sense. If you and I do the same work for the same amount of time and you end up earning fifty dollars more than me, I’m probably going to feel some resentment towards you.

But while this theory tells us how we may have developed our sense of fairness millions of years ago, Dr. de Waal thinks it still could be relevant to people today–particularly when you think of fairness in terms of equality.

“In human society, it’s sort of interesting, inequity I think is just as badly regarded as in monkey society,” Dr. de Waal said. “We officially accept inequities, but it’s not good necessarily for the fabric of society if some people skim off all the good stuff and the others get nothing.”