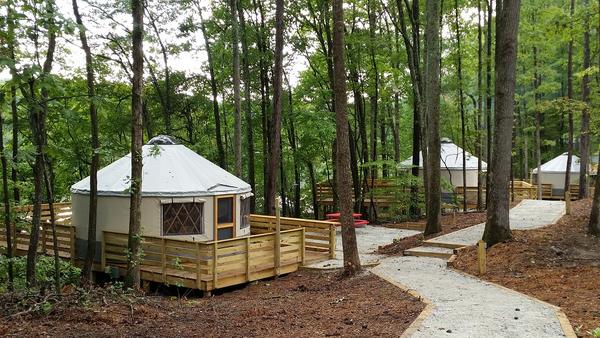 If you want to experience the outdoors but don’t want to camp in a tent, there’s now another option. Georgia State Parks will start taking reservations for 10 new yurts that are now open at Sweetwater Creek State Park.

Yurts are circular structures made of wood and canvas. They’ve been around for thousands of years. The new yurt village at Sweetwater comes as glamping, or a more glamorous form of camping, continues to grow in popularity.

“We have put yurts in a handful of state parks, and they’re really popular, and it’s a nice option when you have a family or a group of people, or one person would prefer a cabin, but one person would like to camp, because it’s kind of combination between a cabin and tent,” says Kim Hatcher, a spokeswoman for Georgia State Parks.

The yurts have electricity, bunk beds, futons, decks, a fire circle, and bathrooms are close by. But if you still prefer to sleep in a tent, five new campsites have also opened at Sweetwater Creek State Park.