Several state lawmakers want to provide more protection and resources for victims of child sex trafficking. They also want to penalize pimps and others who sexually exploit children.

Under two companion bills currently before a Senate committee, voters would get to decide if a fund and a commission to oversee the fund should be set up to help children who’ve been sexually exploited. The money would pay for care, housing and other services for victims of sex trafficking. On Wednesday, Rep. Andy Welch, R-McDonough, went before the committee. He says the fund would help victims rebuild their lives. 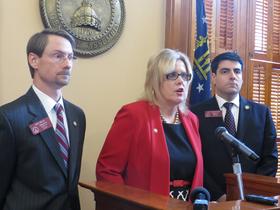 The legislation would also ask voters if adult entertainment establishments should pay 1 percent of their profits or $5,000 to the fund. Sen. Renee Unterman, R-Buford, is sponsoring the bills in the Senate.

“This just to me is the industry that is committing the problem, and I see no reason why they shouldn’t contribute to the remedies,” Unterman says.

In addition, the legislation would allow for the seizure of money and vehicles involved in sex trafficking crimes. It would also require Georgia courts that impose fines for sex trafficking to tack on an additional $2,500 fine for adults.

Under the legislation, those who sexually exploit children would also be added to the state’s sexual offender registry.