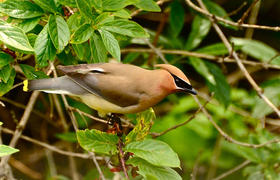 On a gray, early morning in Roswell, Nikki Belmonte and two other birders are piling into her car to go count all the birds they can find in a single day, as part of the 115th annual Christmas Bird Count.

Thousands of birders around the country participate in the Christmas Bird Count. Each team gets a fifteen-mile circle, and tallies every bird in it.

Jason Ward took the day off work to be here. He said he was originally infatuated with dinosaurs, which evolved into an interest in birds.

“I’ve been birding for about a year and a half now,” he said.

Ward also leads bird tours in Piedmont Park. But the first destination on this day was a parking lot in an office park. Maybe not the most obvious birding destination, but the air there was filled with chirping.

“So you see all the little dots up there,” said Nikki Belmonte, “there are gosh, it looks like — here come some more — 75 cedar waxwings.” Belmonte is the executive director of the Atlanta Audubon Society. Cedar waxwings are robin-sized birds whose tails, Belmonte said, look like they’ve been dipped in paint. 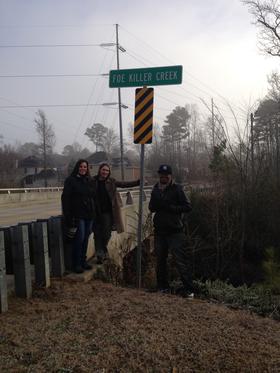 The Christmas Bird Count is the longest-running citizen science project in the world, according to the Audubon Society. And it’s a vital way to learn about bird populations.

“What’s wonderful is now we’ve got over a century’s worth of data, and it’s actually come to good use,” said Belmonte.

Earlier this year, Audubon released a study on how climate change will affect North American birds, using information from the Christmas Bird Count. For instance, the report finds house finches – familiar rosy-colored backyard birds – could disappear from Georgia during the summer within the century.

The counts don’t necessarily happen on Christmas. They take place in the weeks around it, and this year, there are five counts in the Atlanta metro area.

“Atlanta’s got a great diverse habitat area,” said Belmonte. “We have the rivers. We have forest. And we have the grassland areas. So that brings in a mix of different species.”

Even in the denser parts of town, there are all kinds of birds.

“I mean I live in the city; I live in Buckhead,” said Shannon Fair, one of the other birders on the team. “I think I’ve tallied at my house, probably 75 different species of birds.”

“I live right down the street from her,” adds Ward. “I live on the 15th floor. So my view helps out when it comes to hawks. Sometimes like a red tail hawk will perch on the top of the building. Sandhill crane flyovers, a whole bunch of robin flyovers.”

And in Roswell, these three birders saw 50 species of birds. All the Roswell teams combined saw 92 species, 11,549 individual birds, in one day.

Christmas Bird Counts will continue around the country through January 5, including an in-town Atlanta count on January 3.