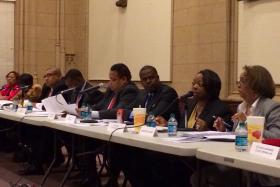 At the committee meeting, Mayor Kasim Reed acknowledged how contentious the process had been, but reiterated it needed to wrap up.

Since July, city officials and the neighborhoods have been working on a plan to revitalize the west Atlanta area. The city isn’t allowed to release $200 million in taxpayer funds to help build the new stadium until the process is complete.

Before about a hundred onlookers, Reed promised revitalization funds would be divvied up fairly and leveraged to bring in even more. He said he’s delivered for the city in the past, and would do so for the neighborhoods in the future.

“We’ve secured more than $200 million from the president’s administration in the last four years and that’s the kind of resources we’re looking to apply to Vine City and English Avenue so I’m not just asking you to believe me. I’m asking you to look what we have done.”

The tone of the meeting was a sea change from last week, when neighborhood leaders accused city officials of an end-run around the committee and said the plan was too vague to be approved.

Monday, the committee signed off on the plan by a 9-3 vote (with Yvonne Jones, Demarcus Peters, and Kyle Kessler opposing), and one abstention (Council President Ceaser Mitchell).

The plan remains largely similar to a much criticized prior version. It includes an outline of project categories, but no guarantee of what projects will be funded. New elements include a three year timeline to disperse the revitalization funds and a new program manager position that will act as a liaison between the city and the neighborhoods.

Yvonne Jones, a committee member who heads the neighborhood planning unit representing Vine City and English Avenue, voted against the plan, saying it lacks specifics and cedes all control to the city.

“All this has been a sham. Whoever comes in, whatever they say. All we can do is hope now. It’s just a hope and a prayer,” said Jones.

She suggested some committee members didn’t have the interests of the community at heart.

“Why was the plan supported? Because you got individuals called and urged to vote for it. I mean, people have motives, and they’re not all just and not right and for community benefits. Some of them are self-serving unfortunately.”

The Westside Tax Allocation District – which is administered by Invest Atlanta, the city’s economic development arm – and the Arthur M. Blank Family Foundation have each committed $15 million to revitalization efforts.

At Monday’s committee meeting, Reed, who chairs the board of Invest Atlanta, said he was eager to see proposals.

“At the end of the day, I chair the board that you’re going to be submitting your applications to and I think you’re going to do incredible things. And I want to make sure you have the money to do it,” said Reed.

The community benefits plan now heads to the City Council’s community development/human resources committee for approval. That meeting is scheduled for 12:30 p.m Tuesday. If approved, it goes before the full City Council Dec. 2.