A group of parents, lawmakers, and activists gathered at  the State Capitol Tuesday to oppose a new set of education standards called the Common Core. Georgia is one of 45 states that have adopted the standards.

“I believe that this lack of respect for the proper process of government, for openness and transparency led to the implementation of inferior standards in our classroom,” Ligon said. 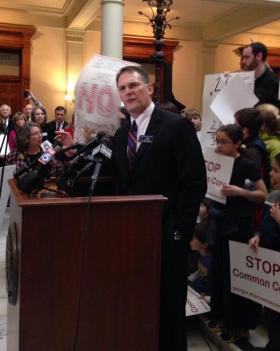 The Common Core is a state-led initiative. States can opt in to the standards. However, the U.S. Education Department supports them. They’ve also tied federal grant money to the Common Core. That’s only one reason why Cherokee County resident Conrad Quagliaroli doesn’t  like them.

“I am in favor of each state making their own standards, not a ‘one size fits all,’” he says. “One size fits all has never worked in the history of the world that I know of.”

Others complained that participating in the Common Core will require sharing student data with other states and the federal government. State and federal officials have said that’s not true.

Common Core supporters will get to make their case Wednesday when they hold a press conference of their own.