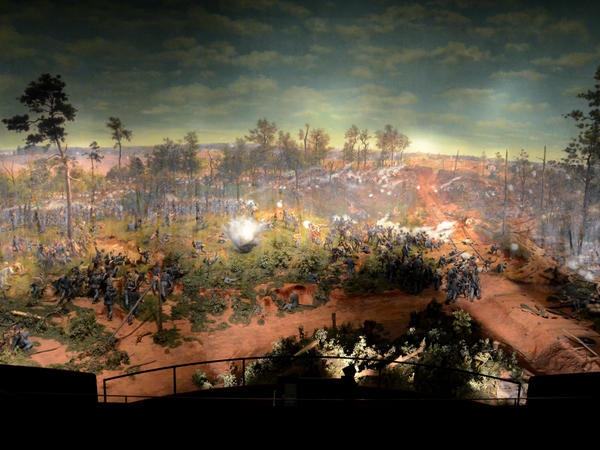 Atlanta is home to one of the largest oil paintings in the world … at least that’s according to the Cyclorama’s website. The massive panoramic painting in Grant Park tells the story of the Battle of Atlanta in 1864.

If you want to know exactly how impressive this fancy cylinder is, just ask Yakingma Robinson.

“The painting is 358 feet in circumference, stands at 42 feet tall, give or take an inch. It currently weighs 9,334 pounds…” You get the picture – it’s huge. Robinson gives tours of the Atlanta icon, which if laid completely flat, “would parallel a football field.”

But still, it’s not quite big enough. The current title of largest oil painting in the world is held by a Union state: Pennsylvania. Their cyclorama – of the Battle of Gettysburg – is just a little bit wider than Atlanta’s.

A cyclorama – by the way – is a painting where you have to physically spin 360 degrees in order to see it all. So at the Atlanta Cyclorama and Civil War Museum, the lights are dimmed and the seats rotate while you hear the story of the Battle of Atlanta.

The original Cyclorama in Atlanta was actually the biggest … until 1921. That’s when city moved it into its current home and cut out about ten feet of sky.

These large cylindrical oil paintings were the precursors to movies. They first became popular in Europe in the late 1700s. The American Panaroma Company in Milwaukee, Wis. needed an artist to draw up the Battle of Atlanta. So they recruited William Wehner in 1885 to put together a team of German artists to work on the painting. 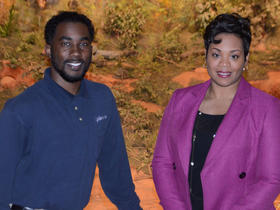 Yakingma Robinson says it took Wehner and his team two years to paint the Atlanta Cyclorama.

“The first known Cycloramas were being created in Europe and American artists initially were still trying to understand how to partake and create these beautiful, beautiful paintings,” Robinson says.

In 1936, the Cyclorama went 3D when a diorama was added to the bottom. More than 100 artists worked on it during the Great Depression. They used real red Georgia clay and grass logs. Those pieces were soon replaced with plastic when insects started to invade the museum.

And the painting can be deceptive. Robinson points to bursts of white smoke that pop out.

Robinson says, “There’s also two brothers over here … You’ll see one giving the other a drink of water out of the canteen. One representing the Confederate side of the line, one as a Union Soldier. [They are] the Martin Brothers of Tennessee. Now that’s one of the more romanticized stories about brothers fighting brothers in the civil war, but a scenario that occurred more often than none.”

If you look closely, you’ll even find a few key characters. One of them looks like a red blob.

“It looks just like a red blotch of paint, but it’s actually the only woman that’s on the painting. She’s a field nurse and she has on a red gown that she’s lying down assisting a wounded soldier. Just over to our right here, we have the only African-American on the painting to represent the freeing of slaves, however we all know that were a little over 200,000 African-Americans that served in the civil war and definitely a lot more women on the front lines, but again, just a depiction of the mentality of Americans at the time.”

You’ll find some famous people too – like General John Logan of Illinois leading a charge and even a statue of a dying soldier who was made to resemble the actor Clark Gable from Gone With The Wind. 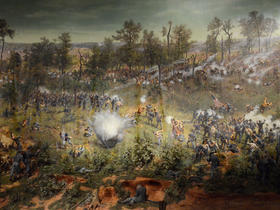 Georgia may have lost the civil war, but it can once more regain its glory and steal back the title of owning the largest oil painting in the world. Once the Cyclorama moves, it can add some of the lost sky.

“The plan is to add back the parts of the painting that was removed in the new home to make sure that the Cyclorama is restored so that is around for future generations and another 100 years,” Cyclorama’s Facility Administrator Monica Prothro says.

Mayor Kasim Reed announced in July that the painting will move to the Atlanta History Center, but for now, you can see the painting in Grant Park until June.Listen to the broadcast version of this story.