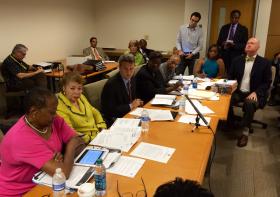 The DeKalb County ethics board Tuesday launched investigations into two more county commissioners over alleged misuse of county-issued credit cards. One commissioner is already under investigation.

The board voted to investigate thousands of dollars of charges by Commissioners Sharon Barnes Sutton and Commissioner Larry Johnson, as well as an aide to Barnes Sutton. Both commissioners say the purchases in question were for legitimate government business.

Commissioner Elaine Boyer and her chief of staff Bob Lundsten are already under investigation for similar allegations. Boyer denies the allegations.

Meanwhile, the FBI reportedly has begun issuing subpoenas over the alleged spending abuses by commissioners and their staffers.

“We’re an independent board that only looks at the DeKalb County Code of Ethics. That is our only jurisdiction. There are all these complaints and we want to be fair and efficient how we handle them all,” said Ernst.

Ernst called for a special board work session next month focused specifically on county-issued credit cards and how they relate to the ethics code.

“We want to try to get our own heads around the whole issue. Not any particular individual case, but as a general issue,” said Ernst.

In other board action, complaints against suspended DeKalb CEO Burrell Ellis were tabled until his upcoming trial is resolved.

Ernst voted against that, but said there were advantages to holding off action.

“We would have a full trial that we would have all the testimony already set out. We could review that. We could then call separate witnesses if we so choose,” said Ernst. 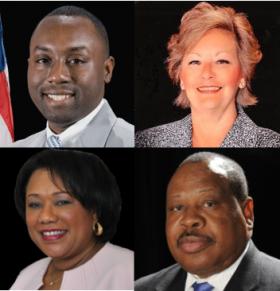 Ellis is on trial for allegedly shaking down county contractors for campaign contributions, a charge he denies. His trial begins in September.

Two others involved in the Ellis case face ethics complaints. Purchasing Director Kelvin Walton and Ellis’ former secretary, Nina Hall, are currently suspended with pay until the Ellis case is settled. The ethics board voted to hold off action in their cases until more information is gathered.

The seven-member DeKalb ethics board has the authority under state law to remove elected officials from office, though it has never done so. This year, the county provided new funding for the board to hire outside investigators to help with cases.

Unrelated to action at the ethics board, Commissioner Stan Watson has come under fire for ethics issues of his own. Watson was recently linked to a pair of defendants in a public corruption trial in South Carolina. In addition, Watson allegedly billed the county nearly $5,000 over the past three years for personal cell phone service. Watson denies any wrongdoing.