Pick 100 high schools across the state, and the Atlanta-based Centers for Disease Control and Prevention says an average of one will include sex education targeted to LGBT youth.An audio version of this report, as heard on All Things Considered

Kaleb Anderson’s is not one. 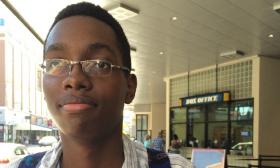 “They don’t bring up anything other than a man and a woman having sex,” he says. “With me being out and gay and sitting in a sex ed class where they’re just talking about a heterosexual man and woman having sex, [it] doesn’t really apply to me at all,” he adds.

Kaleb, who is Black, says his family talks to him about safer-sex.  He feels he knows enough to protect himself. What he didn’t know was that a young black gay man in Atlanta who starts having sex at age 18 has a 60% chance of becoming HIV-positive by the age of 30, according to one report.

“I don’t get scared often, but that really scares me,” Kaleb says upon hearing the statistic. “I just didn’t realize it was that big in Atlanta.”

Eli Rosenberg, Associate Director of Research Projects at Emory University’s Dept. of Epidemiology, says that statistic is “mostly consistent” with what local researchers are seeing.  For five years, he’s been looking into why Atlanta’s HIV rates are so high. The word he uses to describe the HIV infection rate here among young, Black gay men: shocking.

Rosenberg says targeting LGBT youth early is essential, because they’ve formed their sexuality over the course of years.

Abstinence can be one component of an LGBT-friendly sex education curriculum. Condom use, another.  But to really make a difference, Rosenberg says sex education must be comprehensive. That includes affirming sexuality, not stigmatizing it.

The truth is, that’s not often happening in Georgia schools.

“If you give my kid condoms, that means you’re giving them permission to have sex,” says  Suzanne Luker.  That’s not how the health program manager with Fulton Co. feels.  It’s what she says is a common reaction parents have.  And that makes sex ed tough on its own. Start using language specific to gay and lesbian youth, and Luker says that opens up even more concerns.

“If you talk about kids who are gay or lesbian, then that means,  ‘You’re trying to get my kid to be gay or lesbian, and that’s absolutely not correct,'” she says. “We absolutely have lots of work to do in the schools. And we need to do it sooner rather than later.”

Georgia law says students must be exposed to sex education. But that’s it.  Districts decide what to include—or exclude.  Despite repeated requests, Atlanta Public Schools (who is also the holder of WABE’s broadcast license) failed to provide someone who could talk about the district’s policy.

If there’s no drive at the state level to include LGBT-related language, there is a local  grassroots effort.  Georgia Equality is among those working on the initiative.

“The fact that we’re still talking about this in 2014, and that it’s not been implemented already, is criminal,” says Georgia Equality field organizer Em Elliot.

Even if schools aren’t providing information, it doesn’t mean it’s not out there. Groups like AIDAtlanta, the Atlanta Harm Reduction Coalition and county health departments offer free testing and treatment referrals for youth as young as 13.

This report is part of American Graduate – Let’s make it happen – a public media initiative supported by the Corporation for Public Broadcasting to help more kids stay on the path to graduation.

Coming up Thursday, Sept. 4, at 8 p.m., WABE News and PBA 30 will present the program: Day One, Atlanta’s New Superintendent.