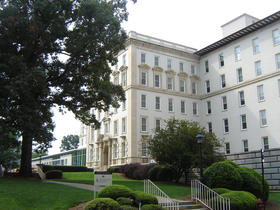 After Emory treated and discharged missionary Nancy Writebol and Dr. Kent Brantly, who’d been flown in from Liberia after contracting the disease, the hospital was flooded with calls asking how the medical staff had done it.As heard on the radio

“Our main issue was that we had inquiries coming in from all directions. We couldn’t service them adequately,” said John Fox, CEO of Emory Healthcare. “We were also at risk for, if they talked to person A versus B, are they really getting the same information.”

So Fox said the hospital built a website for other hospitals to refer to should they find themselves with an Ebola patient.

The Emory Healthcare CEO said the website takes information from the CDC and other health organization and breaks it down to explain how Emory uses it to treat patients.

The website includes information on how to screen patients at hospital entry points and confirm diagnoses, as well as protocols for treatment, protective gear, waste management, clinical laboratories and other potential complications.

“That was unclear in some of the guidelines at the start of this,” Fox said, “but we said we’re going for the highest level of safety we can provide for our employees, and that has served us well to date.”

In a new set of guidelines issued Monday, the CDC strengthened and clarified its policy on what health care workers should wear, suggesting double sets of gloves, disposable hoods, face shields, booties and special masks so no skin is exposed.

The CDC is also now recommending medical staff receive competency training before treating any Ebola patients and that hospitals implement a buddy system for putting on and taking off the protective gear, another precaution Emory took in its early days treating patients with the disease.

The updates come after health care workers in both Dallas and across the nation criticized the CDC for vague and insufficient guidance on treating Ebola.

Those concerns erupted when two nurses at Dallas’ Texas Health Presbyterian Hospital contracted the disease while treating Thomas Eric Duncan, a Liberian man who was diagnosed with the disease after arriving in the U.S. He died Oct. 8.

Emory’s website release preceded news from Emory that a third, unidentified Ebola patient had been successfully treated and released.

Amber Vinson, one of the Dallas nurses who contracted the disease, is still in Emory’s care.

Fox said the hospital’s Ebola website will continually be updated as its protocols evolve.