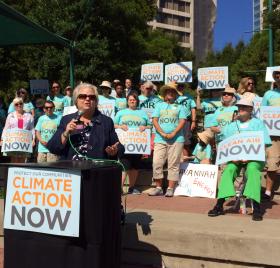 Hundreds of advocates from across the Southeast descended on Atlanta Tuesday. They came for the first of two hearings on the U.S. Environmental Protection Agency’s proposal to dramatically cut carbon emissions from existing power plants.

Multiple rallies and marches were held near the Omni Hotel in downtown Atlanta where the hearing took place. The day took on a convention-like feel, with stakeholders from all sides of the debate ready to make their case.

A food truck rented by the Climate Reality Project, a group founded by Al Gore, set up outside the hotel along Centennial Olympic Park and served free Ben and Jerry’s ice cream while advertising the proposal’s benefits.

“We’re seeing hotter summers and more extreme weather so we thought with the hot summer we wanted to offer people a treat to cool down,” said Tammy Hui.

EPA’s proposal seeks to cut carbon emissions nationwide 30 percent by 2030. In Georgia, which is home to some of the dirtiest coal plants in the country, the state must reduce even more – about 44 percent.

Georgia Public Service Commissioner Tim Echols – a Republican known for his openness to renewables – said the proposal would eliminate jobs, raise utility bills, and was a clear example of government overreach. 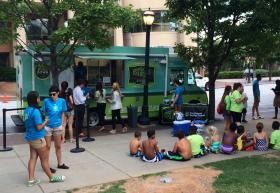 “We’re the number one market for the Nissan Leaf, we’re the fastest growing solar state and we’ve done that without a mandate, without a rule. So why does the EPA need to accelerate things so quickly and put economic hardship on our state,” said Echols.

Advocates for the rule argue the short-term financial impact of the rule is negligible compared to dealing with the long-term effects of climate change.

“Wind and solar are becoming cheaper because they don’t have the pollution cost and fuel cost of coal and natural gas. This is teed up to grow the economy and be the best long-term bet for Georgia and the rest of the country,” said Mary Anne Hitt of the Sierra Club’s Beyond Coal Campaign.

Jim Doyle of the D.C.-based advocacy group Business Forward voiced concern about the impact of increasingly intense and frequent weather events on businesses.

“Auto plants across the Southeast have three of four hours of parts in stock at any one point which means if a storm shuts down highways, that plant has to close until the highways are re-opened,” said Doyle. “Sixty percent of manufacturers’ cost is supply chain. Less than one percent of its cost is electricity. Let’s worry about the supply chain. That’s the cost driver.” 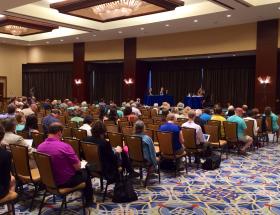 At the hearing itself, opponents stressed EPA was ignoring the proposal’s implications for average ratepayers.

“There’s no funding attached to help pay for this. It has to be picked up on the backs of the working people, small businesses, and industry,” said Brandon Presley, a Mississippi public service commissioner. “We have the highest unemployment in the United States of America and this won’t help at all.”

Jim Jess of the Georgia Tea Party called the carbon rule unconstitutional, saying it was government overreach at its worst. He issued a warning to EPA officials.

“As you tighten the noose around the necks of the American people, we will organize. We will elect men and women to federal office who will shrink your budgets, hollow out your agency, and return many of your agency’s responsibilities to the states where they belong.”

More than 400 people are scheduled to speak in Atlanta over the next two days.

EPA plans to finalize the proposal next summer. Each state would then be required to submit an invidivual implementation plan the following year.