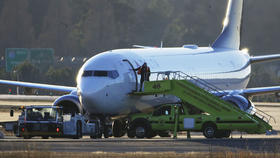 An FBI agent says law officers are continuing to pursue a suspect after someone made bomb threats targeting two jets bound for Atlanta, prompting F-16 fighter jets to escort the planes.

FBI Special Agent Stephen Emmett told The Associated Press on Sunday that the agency is continuing to pursue leads in an effort to locate the individual responsible for the threats.

No bombs were found in searches of both planes after they landed safely in Atlanta on Saturday.

Preston Schlachter, a spokesman for the North American Aerospace Defense Command, says the threats were posted on the social media network Twitter.