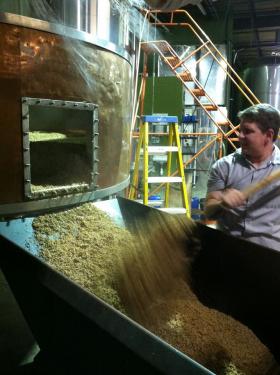 Today is the fourteenth day of the partial federal government shutdown, and it may have already caused you problems: a closed park or passport office or even a job furlough. On top of those issues, here is another potential annoyance: the shutdown is also affecting the the production of craft beer.

Red Brick Brewing in Atlanta makes eight new beers each year: four seasonal beers and four limited edition beers. A little-known branch of the U.S. Treasury Department, called the Alcohol and Tobacco Tax and Trade Bureau (TTB) has to approve every recipe and every label of every beer produced in the United States.

“It’s funny: the shutdown affected us on the very first day,” says Red Brick's Jason Topping. “We were going through the final submittal that day with them, and it literally, it was like, we sent in the paperwork, and the website shut down on us right as we were about to hit submit. It just, just stuck.”

That means Red Brick’s Chai Spice Milk Stout probably is not going to hit the market as scheduled.

Topping says it usually takes the federal bureau between a week and a month to approve a new beer. “Now,” he says, “with this backlog of information, we’re looking at, it could be, three months to six months; we really don’t know.” Topping says he also doesn’t know how this will affect his bottom line.

And Red Brick is not the only craft beer maker in Atlanta affected: Sweetwater Brewing says it also has a beer approval currently on hold due to the shutdown of the TTB.