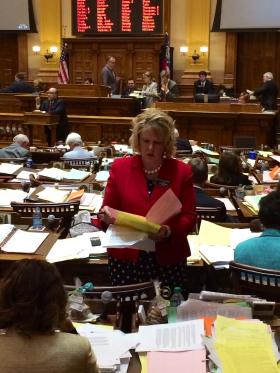 Plans to privatize most of the state’s child welfare system failed Thursday night when House leaders opted not to take up a bill approved by the Senate earlier in the day.As heard on the radio

Privatization looked poised for passage earlier Thursday when the Senate passed a plan that looked similar to the House’s version.

It laid out a three-year pilot program to privatize services like adoption and foster care rather than a statewide rollout, as had previously been pushed for by Lt. Gov. Casey Cagle and other Senate lawmakers.

But the House never took up the Senate’s language, and as the session came to an end, so did the measure.

“It’s not like we couldn’t come to an agreement,” said Sen. Renne Unterman (R-Buford), the bill’s sponsor and original author. “It’s just the disagreement between the House and the Senate, and I think that has to do with the lieutenant governor and the speaker.”

Unterman said she was “disappointed” by the bill’s failure, saying she’d revised it three times in order to curry the favor of House lawmakers.

House Speaker David Ralston, however, called the bill a “moving target,” saying the Senate didn’t pass language that Ralston said House and Senate leaders had agreed upon earlier in the week.

“Frankly I think it diminished the urgency of the case for the measure, and maybe we need to study it a little more, which I think’s always a good thing,” Ralston said.

The governor is expected to announce more details about his plans for child welfare reform in the next few weeks.