During a county commission meeting, several hundred seniors were among those who showed up to ask commissioners to reconsider the proposed budget reductions. The majority were upset about $4 million dollars in possible human services cuts. The cuts would lead to fewer meals, classes and services at county senior centers. Inez Christian was among those who spoke.

“We don’t need at our age to be fighting. We need to be sitting down somewhere relaxing and enjoy life, but you with this budget idea are forcing us to fight, fight, fight.” 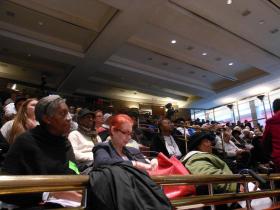 “How are we expected to sustain a 33 branch system and a renowned research library in African American studies with less staff, diminished materials and closed doors?”

“We’re going to do our best to identify efficiencies, also some additional sources of revenue, and my hope is at the end of the day as we finish this budgetary process that we will be able to restore the programs and services at the 2013 level. There is going to be some maneuvering with commissioners, give and take.”

Commissioners are expected to approve a final 2014 budget by the end of the month.