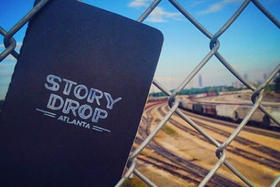 Thanks in part to the ubiquity of social media, the age-old game of the scavenger hunt has returned to Atlanta’s streets.

For instance, there is “Free Art Friday,” where local artists offer small versions of their work for free. The work is often dropped along city streets or parks, posted on Twitter or Instagram, and then the hunt is on.

A new participant to this playful art project puts a literary twist on the game by dropping notebooks in hidden spots around the city.

Participants search Atlanta for one of the notebooks to take their turn writing part of a story. Then they hide the notebook again for the next person to find and write a piece of the story. It’s like a literary version of the old parlor game exquisite corpse, in which two or more artists completed part of a drawing or poem without knowing what came before or after their contribution.

This game is called Story Drop, and WABE’s Myke Johns caught up with them on Peachtree Street.

This story was originally broadcast January 29, 2015.