The drought covering most of Georgia is expanding, and will likely continue through the end of the year. Much of metro Atlanta is in “extreme drought,” the second-worst category on the U.S. Drought Monitor’s scale. It’s even worse in the northwest corner of the state, where the drought is considered “exceptional.”

The drought map is ugly across the Southeast, except for coastal areas that got hit with tropical storms and hurricanes. Alabama, Mississippi, Louisiana, Arkansas, Tennessee and Kentucky are all drier than usual. Abnormally high temperatures are making things worse.

In its seasonal drought outlook, released on Thursday, the National Oceanic and Atmospheric Administration forecast that the drought in Georgia will continue at least through the end of January.

In September, Georgia officials declared a Level 1 drought in 53 counties, including all of metro Atlanta. The declaration does not include any water use restrictions. Outdoor watering is always prohibited in Georgia during the height of the day, between 10 a.m. and 4 p.m., regardless of whether there is a drought.

Flows on the Chattahoochee River are low, and Lake Lanier is 7 feet below full pool.

At the end of October, arguments begin in the latest water wars battle. Florida is suing Georgia, alleging that during droughts, not enough water flows down the Chattahoochee and Flint Rivers to Florida’s Apalachicola River. Florida is asking the U.S. Supreme Court to put a cap on how much water Georgia can use. 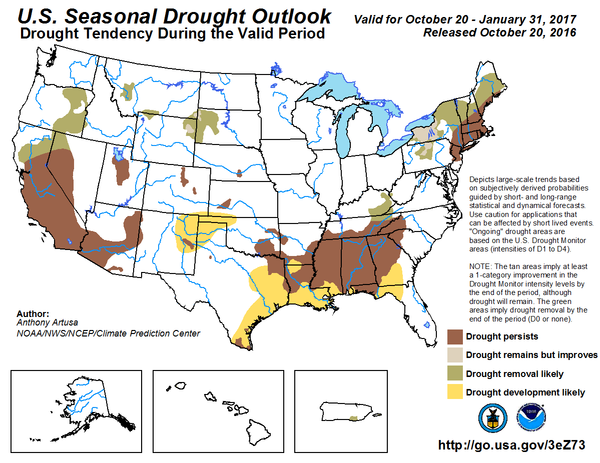