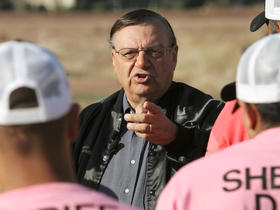 Inmates at a Georgia jail will soon be wearing hot-pink uniforms, an idea borrowed from an Arizona sheriff.

Gary Jones, the public safety chief in the east Georgia city of Grovetown, said he hopes the inmates will be seen in their pink uniforms while collecting litter on public roads. Jones tells The Augusta Chronicle that he envisions motorists driving by and deciding they never want to be in that position.

Jones adds that another goal is to demonstrate that law officers run the jail, not the inmates. Also, he said he hopes the uniforms convince inmates not to come back after they’re released.

Jones said he got the idea from Maricopa County Sheriff Joe Arpaio, who had inmates wear pink attire.