Hundreds of protesters gathered at the Georgia Tech Campanile Thursday to demonstrate against a recent immigration freeze set in place by President Donald Trump.

Trump’s executive order, signed Friday, stopped people from seven Muslim-majority nations from being admitted to the U.S. and suspended refugee resettlement. Protests broke out across the U.S. Saturday. On Thursday, several speakers took the stand at the Campanile to discuss the impact the ban had on the Georgia Tech community.

Georgia Tech student Nishat Firoj spoke about her life in a hijab and the implications of Trump’s recent ban.

“I’ve been wearing a hijab since I was an 8-year-old girl,” Firoj said. “The fact that there are people who look at the hijab and interpret it in their own horrible, twisted ways just represents and shows how the world is refusing to accept different types of people.”

Through talking about people’s differences, Firoj said, a better sense of community can be built.

“I am so ready, and I know Georgia Tech is so ready to fight for their rights,” Firoj said. “We’re all going to be working together – it’s going to be great.”

Georgia Tech Ph.D. Student Mojdeh Faraji, who also spoke at the rally, came from Iran to pursue her master’s degree and later Ph.D. She’s currently undergoing the process to receive a green card, but, after the order, isn’t sure that she wants to spend her future in America. Her family is back in Iran, and Faraji said she doesn’t know if she will be able to see them again if she settles here.

“Should [the ban] remain, I think maybe I would consider leaving,” she said. 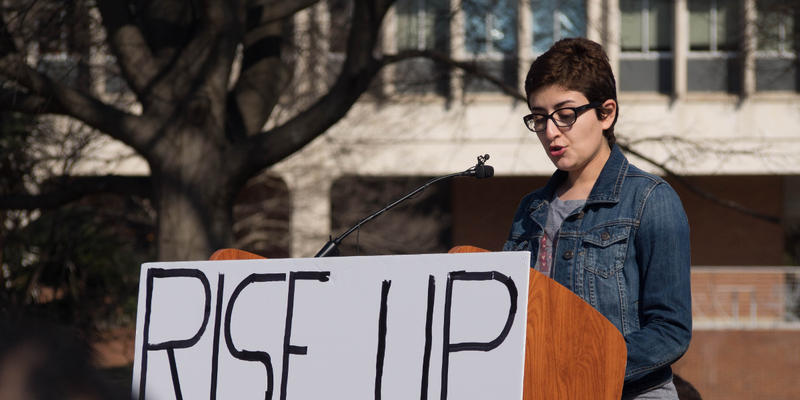 Georgia Tech graduate student Rojit attended the rally and sat near the back of the space. He said he was watching the crowd.

“I wanted to see people doing something about an injustice,” he said. Although he didn’t see as many people talking to strangers about the rally as he had hoped, Rojit said that he was pleased that the rally got a conversation going.

Rojit works with STAR, a Georgia Tech organization which helps the campus community with needs such as food or clothing to getting jobs.

For Rojit, the next step after the rally was to make sure to talk to people tomorrow, “to figure out what’s burdening them, and to figure out, with all of our excess privilege, how we can learn to share.”