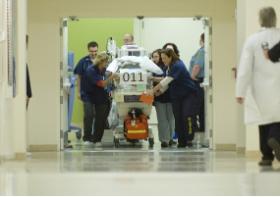 Governor Nathan Deal says he wants hospitals to come together over a critical tax that helps care for the state’s poor and elderly.

It goes by different names. The provider fee. The hospital bed tax. The Medicaid assessment fee.

Whatever the label, Deal says it’s critical to the state.

“Without it, we’re going to be hard-pressed to maintain the quality of care and to provide the payments to the provider community that we’d like to see.”

Passed in 2010, the provider fee allows the state to collect 1.45 percent of net patient revenue from hospitals. It raises more than $200 million annually for the state Medicaid program, and helps draw down another $200 million in matching funds from the federal government.

The fee is set to expire next year, unless lawmakers decide to renew it.

Deal says allowing the tax to expire would wreak havoc on the state budget.

“I support something that is going to provide for the filling of that gap in our  budget and the provider fee seems like the most logical way to do that.”

When originally passed, the fee led to fierce infighting among Republican lawmakers. Supporters said it was essential to prop up the state Medicaid program and balance the budget. Others derided it as a tax on patients.

Deal says a unified front among hospitals will help avoid another ugly episode at the state Capitol.

“I certainly hope the hospital community – if they can come together on an agreement and recognize the importance of it – they’re the ones that are going to be making those payments. We would hope that would mitigate some of that conflict,” said Deal.

Most health systems and hospitals agree with the governor, particularly those that treat larger shares of low-income and uninsured patients like Atlanta’s Grady Memorial Hospital.

Some, however, are looking for alternatives.

Matt Gove, a spokesman for Atlanta-based Piedmont Healthcare, says the tax unfairly impacts certain hospitals, including some of his own. He wants the financial burden spread out.

“Why has it become the hospital industry’s responsibility to fill this hole for a service that all of society wants, needs, and should be supporting?”

Gove suggests increasing the state tobacco tax – traditionally a nonstarter at the Capitol, but popular within the healthcare industry – or diverting funds from other parts of the state budget.

Gove says even if hospitals can come together over a provider fee renewal, he’s skeptical it’ll make a difference.

“The number of legislators who cannot, who will not, vote for any sort of tax increase has grown extraordinarily in the past two election cycles, so to me the bigger question is whether it can pass.”

Regardless of the provider fee, the state Medicaid program is already financially challenged. It’s facing a deficit of more than $300 million heading into next year.