Grant Park is full of historic trees, but many near the main road are marked with orange Xs.

“We’re looking at a Water Oak [tree] at the corner of Boulevard and Confederate Avenue,” said Leigh Finlayson. “It’s old and it’s beautiful. It’s a poster child of Grant Park.” 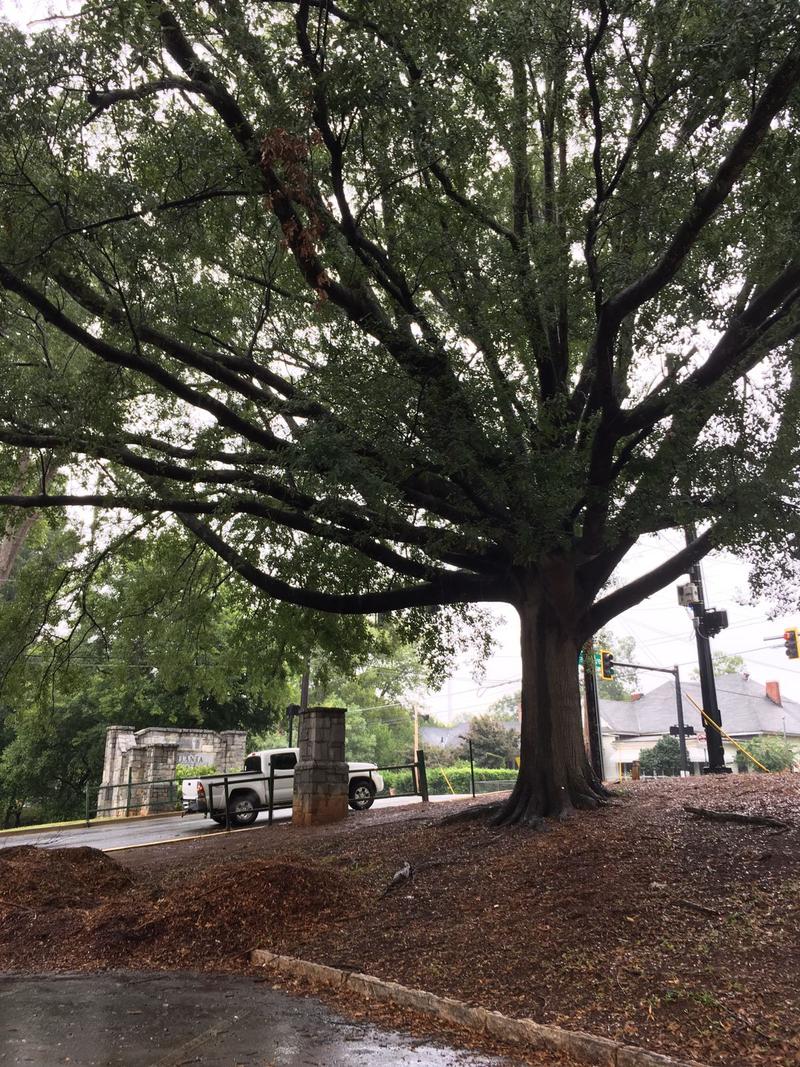 Finlayson lives across the street from a row of trees on Boulevard Street, many of which are more than 50 years old, where a semi-underground three-story parking deck is planned.

“This is a late-life conversion, if you will,” Finlayson, a criminal defense lawyer, said. “I was a boy scout as a kid, I spent a lot of time in the wilderness, but this was never my calling or mission until it just came to my front yard. Now it’s become a priority.”

‘Save The Trees Of Grant Park’

He’s leading the campaign to save some of the 131 trees on the chopping block, by calling for the city of Atlanta to build a smaller deck and move it further inside the park.

“Why this deck has to be 1,000 spaces makes no sense,” Finlayson said. “I think there are good people that mean well here, but this is a no brainer. If it could be limited in a way, at least save the trees on Boulevard, I could probably stomach it better.”

Finlayson filed a tree conservation appeal with the city of Atlanta to save some of the trees.

The new “Gateway Project” is expected to have a “glass dine-in regional cuisine restaurant” with casual dining on the first level and fine dining on the top level “with balconies overlooking green roof elements.”

In addition to improvements at Zoo Atlanta, the total project is set at a maximum cost of $48 million. The city approved a $35.5 million revenue bond earlier this year for the parking deck and authorized the transfer of funds from other departments to fund the remaining $12.5 million.

At an open house on Wednesday at the Grant Park Recreation Center, city of Atlanta arborist Chris Kallio sympathized with resident Barbara Antonoplos, who complained it was a lot of trees coming down for a parking deck.

“There’s no getting around it, it’s a lot of tree impact,” Kallio responded. “We’re doing the best I can with getting stuff put back in the park. If a tree is going to be saved, it is up to us to make sure that it’s saved.”

The city plans to replace all of the tree “caliper inches,” once the parking deck is built. The caliper of a tree is measured by the thickness of the trunk. The 131 trees being replaced equate to 1,496 inches of trees that will be replanted elsewhere in Grant Park.

But some residents, like Norman Pawloski, said they’re not as concerned about the tree loss.

“Right now people are continually going around and around to find a parking spot,” Pawloski said. “When I look out my door, it’ll be greenspace. It’ll be a great improvement over what they have now.”

He said he’s excited the deck will have a green roof and is meant to blend in with the park.

“I’ve seen all the [yard] signs ‘Save the Trees of Grant Park’ but to move on, you have to do what’s best for the project,” Pawloski said. “The plans look good. There’s always going to people protesting this or not wanting that. That can just drag it on forever.” 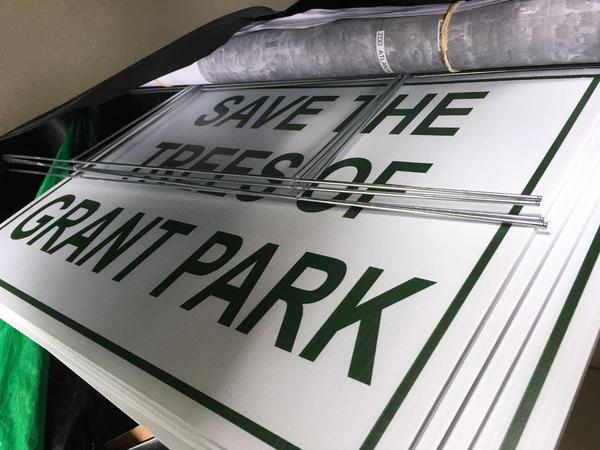 Rick Hudson, is the land use and zoning chair for the Grant Park Neighborhood Association.

He said those 1,000 parking spaces are needed to accommodate the planned expansion of Zoo Atlanta, which involves creating a new “African savanna” for the zoo’s African elephants and giraffes. It’s also meant to accommodate visitors to the former Cyclorama building, which will be converted into an event space.

“There’s a number of considerations that bring other monies into our neighborhood that are depending on this project to move forward,” Hudson said. “It compromises many things in our neighborhood. It’s a house of cards effect.”

City of Atlanta parks and recreation commissioner Amy Phuong said the city held several public meetings and it relied on the neighborhood association and Grant Park Conservancy to advertise them.

“We went through a mobility feasibility study of the entire area and looking at the traffic congestion and as we look to the future of growth we will continue to see Grant Park experience, the city asked for 1,000 parking spaces,” Phuong said.

Phuong said residents helped amend the project to include public art and a 60,000 gallon cistern to catch rainwater.

“Folks did not want to see a downtown-like parking deck amenity in front of their homes or driving down Boulevard,” Phoung said. “That was the number one concern so we did geotechnical studies to see if it was possible to make it semi-underground.” 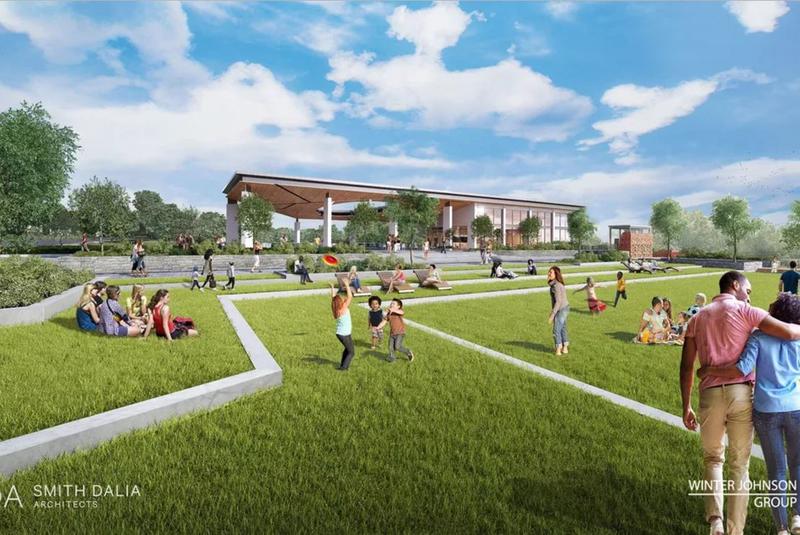 Several residents at the open house on Wednesday expressed concern to city arborist Kallio that they had not received notice of the meetings and didn’t hear about the project until recently.

Hudson said he announced these meetings with the Grant Park Conservancy and city of Atlanta for more than two years during Grant Park neighborhood meetings, at least two of which were public and hosted by the city of Atlanta.

Grant Park Conservancy’s executive director Michelle Blackmon said she has been pushing for the deck to offer additional greenspace and to be underground from the start.

“If the design can be tweaked and somehow save additional trees, then obviously as a conservancy, we would love that, but not at the cost of compromising the integrity of the design principles that we really advocated for,” Blackmon said.

Zoo Atlanta said the structure is a city of Atlanta project and encouraged residents to contact the Department of Parks and Recreation with comments.

“We’re confident that the project will bring many benefits and improvements to parking and mobility for the entire Grant Park community, not just Zoo Atlanta,” according to a statement from Zoo Atlanta. “The Grant Park community draws more visitors now than ever before. The new amenity will offer greenspace and parking solutions, and benefit the community and visitors for years to come.”

Commissioner Phuong said she expects construction on the deck to begin later this year and it could take nearly 20 months to complete.