The largest immigration center in the U.S. is about 30 miles south of Columbus, Georgia. Protestors claim the treatment of detainees at the Stewart Detention Center in Lumpkin is inhumane. In an effort to have the center shut down, immigrants’ rights groups recently held a seventh vigil and march.

The protest began with song at the Lumpkin courthouse, in the center of town. The organizing groups, including Detention Watch and the Georgia chapter of the ACLU, claimed the conditions at the Stewart Detention Center are brutal. Bryan Holcomb, a former Stewart employee, said detainees were routinely mistreated.

“I want to tell you that if you’ve ever had any questions on whether there’s abuse out there, as a former employee, I’m telling you, there is abuse and it’s almost daily,” Holcomb said. “And there’s a high burnout because once you get out there, what this company does to your soul, you will have to quit.” 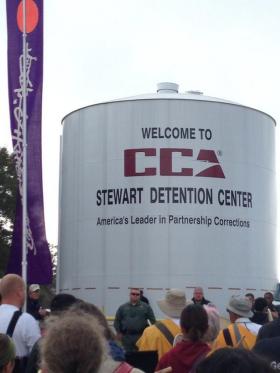 Stewart is overseen by U.S. Immigration and Customs Enforcement. However, the agency outsources day-to-day operations to Corrections Corporation of America, a private company.

From the courthouse, the group marched two miles to the detention center. Officials stopped them outside, but the protest continued. Elizabeth Marie Rios said six months after his release, she still doesn’t know why her husband, Miguel, was detained.

“He went straight from the North Charleston jail the day after his two petty misdemeanor charges were dismissed,” Rios said. “Eight months. For what? For what?”

“He asked every single court case, ‘Why am I here? I have no charges,” she said. “I understand an undocumented person maybe needs to go through the court process and have background checks and whatnot, but to be incarcerated in this hellhole? There are people who stay in there for up to two years waiting for court.”

Victor Conde, a California-based immigration attorney, attended the march as a legal observer.  Conde, who also teaches international human rights law, said in many U.S. immigration cases, defendants aren’t granted all of the rights to which they’re entitled.

“We should have lawyers provided where someone can’t afford to have a lawyer,” Conde said. “There should be all aspects of due process in immigration proceedings, even though they’re administrative proceedings. We’re not up to the international standard there.”

A House of Hospitality

As the protestors marched back to the courthouse, many of them stopped at a small, yellow house on the side of the road to grab a bite to eat. El Refugio (The Refuge) is a hospitality house for families of detainees. It was started three years ago. Marie Friedmann Marquardt, a scholar in residence at Emory’s Candler School of Theology, is a co-founder.

“The area around the facility doesn’t offer any basic services, places for people to stay, restaurants, even grocery stores or gas stations,” Marquardt said. “So, several of us, several folks came together and decided that we should open a house of hospitality, a place for people to gather so that they can visit from great distances their loved ones.”

El Refugio is only open on weekends because it’s staffed by volunteers. Marquardt says she’d like to see a day when the house isn’t needed anymore. She doesn’t think that will be anytime soon because, she says, the U.S. detention system is broken.

“Most of the people in this facility don’t have criminal convictions,” she said. “They’re being detained on immigration charges until their court date. And there are other, much more humane and less expensive ways to ensure that someone arrives at his or her court date.”

In a statement, ICE said it will “carefully review the concerns raised by Detention Watch” and will respond as necessary. Read ICE’s full statement here.

Regarding allegations of abuse, CCA said it “takes any allegation seriously and thoroughly investigates when allegations are received.” Read the entire response from CCA here and its response to a 2012 ACLU report here.