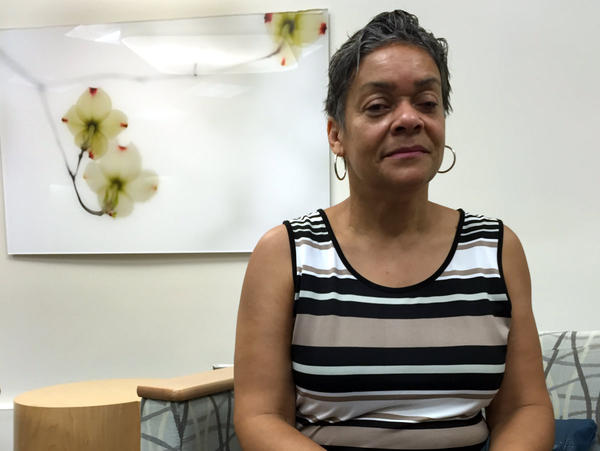 An audio version of this story, as heard on “A Closer Look.”

The main purpose of the Affordable Care Act is to provide affordable health insurance to those who might not otherwise be able to afford it.

But getting a health policy is just the start.

For many, high deductibles and co-pays that come with the most popular plans still leave medical care out of reach.

That’s what happened to Renee Mitchell, 63, of Stone Mountain. She previously put off a medical procedure because of cost. But with the threat of losing part of her vision a real possibility, she came to Emory to see a specialist.

While that’s scary, it’s not as worrisome as “further co-pays [and] more out-of-pocket expenses,” Mitchell says.

Mitchell notes she’s pleased with her insurance – a silver-level plan she purchased through the insurance marketplace – but she says she struggles to keep up with her part of the bills.

“If not for having availability on my credit card, we’d probably be in the poor house,” she says.

Mitchell notes she owes upward of $20,000. Each month, interest accrues. If she undergoes that third eye surgery, she’ll face a $4,000 deductible.

A study released Thursday by Families USA shows a lot of folks with coverage like Mitchell’s feel a similar burden.

“Consumers are still struggling with unaffordable, out-of-pocket costs,” says Lydia Mitts, a Senior Policy Analyst with Families USA. The non-profit’s new study shows many who buy their own insurance avoid seeking medical treatment because of cost.

“One in four adults who were fully insured for the whole year still reported they went without some needed medical care because they couldn’t afford it,” says Mitts.

Mitts says the majority of people who buy insurance on state or federal exchanges pick silver-level plans, which often carry a lower premium with a high deductible – $1,500 or more.

Many in that situation skip follow-up care and don’t fill prescriptions, which Mitts says only adds to long-term complications and costs.

But Mitts says it doesn’t have to be that way.

She points to Pennsylvania, Texas, Florida and Arizona, all of which have done away with deductibles on some silver-level insurance plans – which is the most common type of plan.

Some other states – not including Georgia – require only a small co-pay for basic services.

While co-pays, deductibles and co-insurance weigh heavy on Renee Mitchell’s mind, they’re not her only insurance concern. She says her monthly premium is getting more expensive due to her age. This year, she says, it jumped about $100 a month.

Mitchell wants to be clear though: she’s not looking for a handout.

“I feel like people seem to think that we just want something for nothing,” she says, tears in her eyes. “I worked a lot of years. I took  an early retirement to take care of my family. It’s not my fault, so to speak, that I’m here.”