New light rail lines could be coming to Atlanta along the BeltLine.

They’re a central part of an expansive list that MARTA unveiled Wednesday for what to do with $2.5 billion in taxpayer money if Atlanta voters agree to a half-penny sales tax increase in November.

“The list we presented today is bigger than what we would be able to do,” MARTA Board Chairman Robbie Ashe said Wednesday. “Think of it as a menu. There will be some choices. We know not everything that’s on that list will get built. We know that some things that are not on that list will probably get built.”

July 31 is the deadline for the city of Atlanta and MARTA to come up with a final list of projects for the potential $2.5 billion budget. The city gets the final say on whether the referendum will actually appear on the November ballot.

Ashe wouldn’t say what the agency wants to stay on its list, but he highlighted light rail along the BeltLine.

“I think everybody shares a goal to do at least some amount of rail on the BeltLine. But it’s not the only corridor that needs that enhancement,” Ashe said. 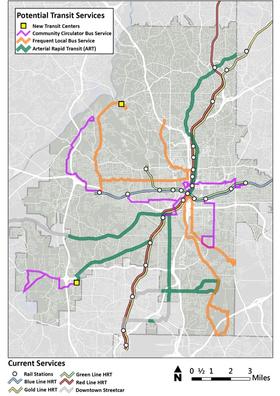 Here are some of the major projects on the list: