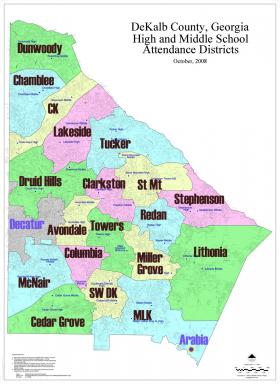 Three groups in central DeKalb County have been fighting for cityhood for nearly two years: Briarcliff, Lakeside and Tucker.

Now there are new voices entering the discussion.Broadcast Version

“We need to act rather than be acted upon,” says Justin Critz of the Druid Hills Civic Association. He says the group is asking its 4,400 homeowners and renters to pay attention to what is going on in the cityhood debate. Critz says the association is gathering information and putting it out to residents.

That is also happening in Medlock Park, a neighborhood with some 1300 homes near the Decatur city line. Lynn Ganim, acting president of the Medlock Area Neighborhood Association, says, “We have no clue what sort of power we have or what could happen to us, but we want to make sure that people are educated about options.”

The potential options for both groups are wide-ranging: annexation by Atlanta, annexation by Decatur, staying in one of the current cityhood maps, or even staying unincorporated.

“There is a leave us alone feeling,” says Ganim, “but I’m not sure that we can push for that except in the negative, by voting against things, which is entirely possible.”

Neither neighborhood group knows at this point which of the options is probable or even possible. For Medlock Park, annexation by Atlanta would put it at the tail end of other areas that would have to be annexed. That includes Medlock’s next-door neighborhood, Clairmont Heights, another group of DeKalb residents now listening closely to the cityhood discussion.

Part of Druid Hills is already in the City of Atlanta, but Critz thinks there is another issue. “Schools are probably, you know the linchpin on this, I think even more so than taxes.” He points to Fernbank Elementary, a DeKalb County school that draws people to the neighborhood.

Geographically, in between Medlock Park and Druid Hills, you find Emory University, which is concerned that any new city could divide its campus. In a recent statement, Emory said it is currently monitoring the situation.