If Georgia does not expand Medicaid, as is now Governor Nathan Deal’s plan, the state’s economy will do without about $4.9 billion in the year 2022.  The figure comes from a newly-released Commonwealth Fund report on how states will gain or lose in the Medicaid expansion equation.

The study finds that for Georgia, keeping the program guidelines as they currently exist is largely a losing equation.  That’s because federal taxes know no state borders, and it’s federal taxes that will pay for the program’s expansion.

“So in effect, Georgia taxpayers pay for Medicaid expansions in all the other states,” without getting many of the benefits, says Sherry Glied, dean of NYU’s Wagner School of Public Service and author of the report.

But Georgia Governor Nathan Deal has long said spending more money on Medicaid isn’t an option because there isn’t any extra money to spend.  And, eventually, states will have to pay 10% of the added costs. 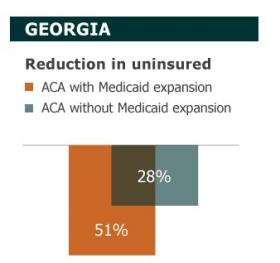 For Georgia, that would be about $573-million–roughly one-third what the study finds Georgia will spend in 2022 on incentives to attract private companies.

“If you think of healthcare as just another business, this is a pretty easy way for a state to attract a lot of it,” says Glied.

It would also offer up to 400,000 low-income Georgians health insurance they otherwise might do without.