Protesters joined two Peoplestown homeowners opposed to the city’s plan to build a pond on their block.

The city of Atlanta has taken over five properties in Peoplestown through eminent domain for a flood control project. At least two of those homeowners are still fighting to stay.

“Tell eminent domain! Tell it! Put up your dukes! Put up your dukes!” shouted Bertha Darden. Even standing among protesters gathered in her neighbor’s yard on Nov. 18, the 30-year Peoplestown resident was like a one-woman pep rally. Needless to say, Darden doesn’t want to move.

Her neighbor, GSU professor Tanya Washington, wants to stay too. She lives on a corner of a block that’s now mostly empty lots. More than 20 other homeowners have sold their homes to the city.

“The city of Atlanta has initiated a lawsuit against me and my neighbors,” said Washington. “And they right now own legal title to this house.”

The low-lying land, which sits amid some of Atlanta’s notorious sewer lines, was the site of major flooding in 2012. The fate of this block has been a flashpoint for at least three years now, since the city announced plans to build a rainwater retention pond there. The design plan is similar to a retention pond in Old Fourth Ward.

“This is a major situation that compromises public health,” said Lilian Govus, with the city’s watershed department. “And while we’re in a dry pattern right now, we know that through these climatic cycles, we’re going to see wet weather again.”

But after the 2012 flooding Darden says Mayor Kasim Reed told her and other residents the city would fix the problems without them having to move.

“Two years later, we got a letter asking us to give up our house. ‘We’re going to displace you,’” said Darden. She said feels like the city is pushing her out to make room for development that will come with changes to nearby Turner Field.

Sen. Vincent Fort, who’s running for mayor, joined the residents and protesters Thursday. He framed the future of Peoplestown as a metaphor for development concerns across Atlanta.

“It’s going to determine whether this is a city that watches out for regular folk in neighborhoods or billionaires in mega-projects,” said Fort. “This will tell the story.” 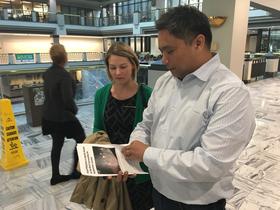 Not everyone agrees with that characterization. Travis Parks has grown up in the neighborhood, across from the block, and supports the city’s plan to build a pond.

He said he understands some people don’t want to leave their homes, but he’s frustrated with divisiveness that’s become a part of discussions about the block’s future.

“This, to me, is theater,” said Parks outside an Atlanta City Council meeting Monday.

“It’s real for us, it’s not real for those people,” he said, referring to protesters opposed to the city’s plans.

Washington and those critical of the city’s pond plan point to earlier engineering proposals that included an option to build the pond in Turner Field’s parking lot.

“What we found is that the elevation there wouldn’t allow us to have the sort of capacity we need to actually alleviate the flooding, because the parking lot is at the top of the hill,” said Govus. She added that the city did install a multi-million gallon vault underneath Turner field as well as installing a major permeable paver project in surrounding neighborhoods. Govus said the city’s modeling shows those changes won’t be enough to prevent flooding in the lowest parts of Peoplestown, where the block in question lies.

Another point of contention for those opposed to the pond is Reed’s decision to allow nonagenarian Mattie Jackson to live out her life in her home on the block. 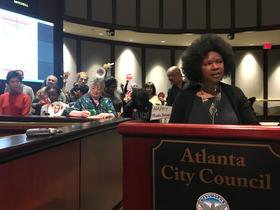 “In the middle of what the city is calling a cesspool, you allow a 93-year-old woman to stay?” Washington asked the city council incredulously, backed up by about 20 supporters. “The city was tired of being sued by the people whose homes did flood, and so they took the entire block.”

She believes the city has not sufficiently explored options to address the flooding that doesn’t displace people.

Accusations of gentrification and economic and racial displacement have been leveled liberally at the city by those who oppose the pond’s construction. For Jackson Faw, a Peoplestown resident who supports the city’s plan, the complaints around race have taken an emotional toll.

Faw was heckled by protesters as he gave a statement before city hall, listing his neighborhood bonafides. He noted his participation in an anti-death penalty organization and opposition to policies that negatively affect poor, minority communities.

“The reason that this is an important point to me is to say that I’m not a racist. I’m the furthest thing from a racist,” said Faw. He went on to argue the city’s plan is similarly not motivated by racism.

He and Washington sat across from each other that day in the council chambers. The two have exchanged dueling police reports of harassment. Faw said he’s been disturbed by protest signs around the neighborhood, including one placed in his yard, that read “Zoned for Gentrification – Office of Whitewashing.”

The city has offered the residents 20 percent above market value for the properties. Darden and Washington said they’ve retained a lawyer and aren’t budging.

Supporters and detractors of the city’s proposed pond in Peoplestown gave public comment before the Atlanta City Council.