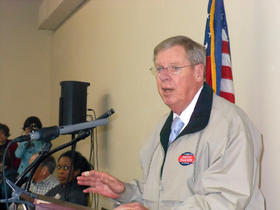 This past November, American voters gave Republicans control of both houses of Congress.  After President Obama said he had his veto ready for GOP bills he doesn’t like, there were dire predictions that the Washington gridlock of the past few years will get even worse.

But Georgia Republican Senator Johnny Isakson insists the divided government has a chance to work, even as he promises to take on the President and campaign for his own re-election in 2016.

WABE’s Denis O’Hayer spoke with Isakson on Saturday, January 10, 2014, a day after the Senate passed the Keystone pipeline bill, which the President has threatened to veto.