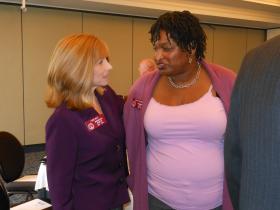 On November 20, 2013, the Fulton County Commission received a proposed 2014 budget that called for a 50% cut to the county’s contribution to Grady Memorial Hospital.  That has again raised the question of the hospital’s future—not only for Fulton and DeKalb counties (which provide much of the funding), but for the entire state.  On November 21, at a meeting of the Metro Atlanta Mayors Association, WABE’s Denis O’Hayer talked about it with 4 leading state lawmakers:  House Minority Leader Stacey Abrams (D-Atlanta); Sen. Renee Unterman (R-Buford), who chairs the Senate Health and Human Services Committee; Sen. Steve Henson (D-Tucker); and former Fulton County Commissioner, and current Rep. Lynne Riley (R-Johns Creek).