Atlanta Mayor Kasim Reed said the city has a plan to relocate hundreds of homeless men, women and children if a large shelter located on Peachtree and Pine Streets has its water shut off. City officials say that could happen within the next week or two unless operators of the Peachtree-Pine shelter pay the city $600,000. Reed said if the water is turned off, the city will work with Fulton County to evacuate the building. He said the relocation will be done in a “compassionate manner.”

City officials say the Metro Atlanta Task Force for the Homeless, which operates the shelter, has not paid its water bill since 2010. The Task Force recently offered to give the city $100,000. 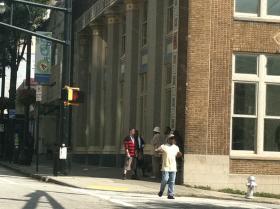 But after fighting with the Task Force for years, including in court, Mayor Reed says the shelter’s operators will have to pay their water bill and a federal court judgment with interest in full.

Reed says the shelter is among more than 270 customers who face having their water turned off due to years of nonpayment.

“This has gone on for a year, the amount owed is $600,000, and Peachtree-Pine is not good for the city of Atlanta. It is awful. It has rampant drug sales, and it poses a serious risk to the health of people in the City of Atlanta.”

“We feel good that we have more than enough spaces to house individuals who want to be housed,” said Reed.

Peachtree-Pine operators did not return WABE’s interview requests by deadline.