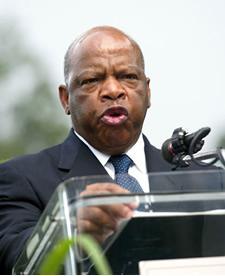 Wednesday, August 28, 2013 is the 50th anniversary of the March on Washington.

In a series of conversations, WABE is collecting stories from people who were a part of it.

John Lewis is now a Democratic Congressman from Atlanta.  At the time of the march, he was a leader of the Student Non-Violent Coordinating Committee (SNCC).  He was one of the “Big 6” organizers of the march, and is the sole surviving speaker from that demonstration.