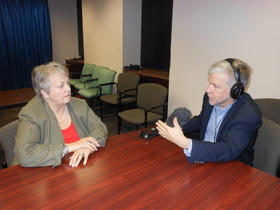 Wednesday, August 28, 2013 is the 50th anniversary of the March on Washington.

In a series of conversations, WABE is collecting stories from people who were a part of it.

Nan Orrock is now a Democratic State Senator from Atlanta. But in 1963, she was a college student who joined friends from work to take part in the march — though she didn’t feel she could tell the truth to her parents about it.

Orrock says that day changed her life. She spoke with WABE’s Denis O’Hayer.