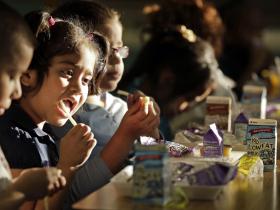 Georgia is leaving about $15 million in federal funds on the table that could go to feeding low-income kids during the summer months.

That’s according to a new report by the Food Research and Action Center in Washington D.C.

There are two main federal programs aimed at feeding low-income kids when school is out of session: the National School Lunch Program Seamless Summer Option and the Summer Food Service Program. The U.S. Department of Agriculture administers both.

The report (pdf copy here) shows the state is actually doing a decent job in the amount of kids they’re feeding through those programs. But report author Crystal FitzSimons says Georgia is a large state with a lot of kids who receive free or reduced lunch during the school year.

“They’re only serving one in seven of the low-income children who rely on free or reduced-priced school meals during the school year so there’s a lot of room to grow the program.”

The report shows the state could be feeding about 200,000 more low-income kids during the summer.

FitzSimmons says much of the issue has to do with the state needing more local community partners – school systems, church groups, and summer camps – to sponsor and administer the program.

”There was actually a drop in Georgia in the number of sponsors and sites last summer so I think retaining sites and sponsors and then also doing outreach to increase participation will be key in growing the program.”

Much of the responsibility in coordinating those local partners lies with the Georgia Department of Early Care and Learning, specifically its Bright from the Start program.

Its spokesman Reg Griffin said it was too early to respond in full to the report figures, but he acknowledged they’ve had issues finding committed local partners in some parts of the state.

“Sometimes you have folks that get really fired about it on the front-end and don’t fully realize the commitment that’s going to need to be made over the next month, two months, three months of the program.”

Griffin says this year they identified 14 counties, mostly rural, which had no local partners or sites where kids could get summer meals. He said in those areas progress is being made.