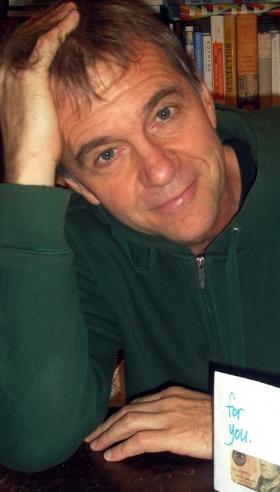 Many people around town will be surprised. And many will claim they are not.

WABE has been given the scoop on the solution—of sorts—on an art mystery two years in the making. Randy Osborne, Atlanta writer and curator of Carapace Raconteurs storytelling night, has come forward to reveal himself as Narrative Urge.

Considerable intrigue mounted starting in April 2011, as folks around Atlanta and beyond either found or were mailed an art project from an anonymous someone.  The project came in the form of a mysterious package containing three puzzling things: a cryptic letter with a clue on it, a slip of paper with a quotation, and a ten-dollar bill.

Now, 100 mystery packages later, Randy Osborne says, “I really wanted to claim this project as mine. It’s one of the things I’d done while I’m on the earth…but I didn’t want to do that until as much juice had been wrung out of it by the people who were enjoying it as they could wring.” Besides, sometimes it’s a little lonely being the secret someone who makes everyone else feel connected.

Osborne says he chose WABE because, while all the stories about the project were flattering and fantastic,  our coverage “came the closest to understanding the essence of what the whole project was about.” Well, thanks.

Listen here, as WABE’s Kate Sweeney interviews Randy Osborne on all the details behind Narrative Urge and Ten Stories High.

You can also view “Hydra,” the full story created by everyone’s quotations, at Scoutmob.