Researchers at Georgia Tech and the Georgia Department of Transportation have spent more than 10 years developing a robot, called Roadbot, that can seal cracks on major roads and highways.

Roadbot has lots of body parts – cameras, computers, a machine that melts asphalt and colorful LED lights. It latches onto the back of a pick-up truck.

It looks complicated, but the idea is simple. It finds a crack, a high-speed camera snaps a picture, and ─ within a fraction of a second ─ a computer generates a “crackmap.” This tells the master controller where to fire the asphalt.

Jonathan Holmes is project director of Roadbot at the Georgia Tech Research Institute.

“It’s happening very fast. On the order of milliseconds. So it fills the crack ─ you know ─ just nearly instantaneously,” Holmes says. “And that’s why it sounds like a shot as these things are going off ─ it’s this very high pressure that’s coming out.”

It fills those little cracks that happen from wear and tear and temperature changes – not the big potholes.

David Jared with the Georgia Department of Transportation says safety is a top concern with crack sealing.

“Normally you’ve got people out there on the ground. Or in the case of the crack sealing, there’s people out there with devices on their feet applying this bituminous asphalt,” Jared says. “It was relatively high risk research project to see if we could actually automate this operation.”

And they did. Except for a human driver of the truck, Roadbot is fully automated. And moving along at just five miles per hour, it’s five times faster than humans at sealing cracks. But there were a lot of challenges.

“There was a lot of work on just the sealant dispensing – so that applicator development – I know it went through three or four major revisions to get the timing down to where it could be dispensed fast enough at the right temperature and not splash too bad,” Holmes says. 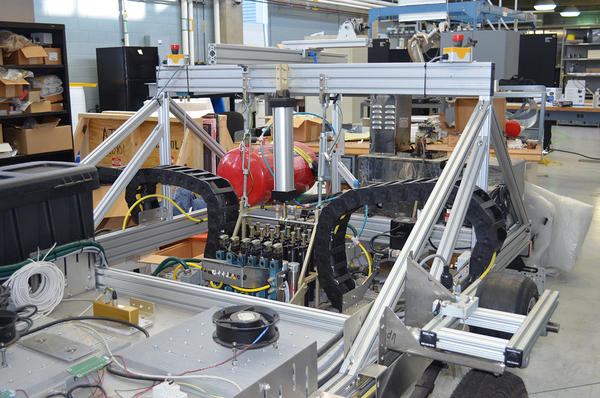 The right temperature is 370 degrees Fahrenheit. And then there were problems with the lighting. Sunlight was messing with the camera, so they had to design a better shield. And they needed sharper images of the cracks, so the green LED lights are perpendicular to the red LED lights at the bottom.

“Automating some of these processes, which for decades have been done manually is really breakthrough research – the question is: where do we go from here?” Jared says.

The project has been in limbo for the last two years while GDOT tries to find partners to share the cost of building a full-scale Roadbot. Right now, the prototype Roadbot can seal cracks up to 12 inches wide. A full-scale Roadbot, which would take another two years to develop would cover 12 feet – the width of an entire lane.

Wayne Daley is with the Georgia Tech Research Institute.

“You know you develop the prototype, but there’s still always this gap to go from a prototype to a commercial product and usually people underestimate what’s involved,” Daley says.