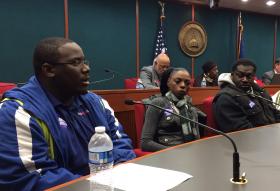 A large group of low-income school workers, including bus drivers, stand to lose a hefty chunk of their pay under a bill being considered by state lawmakers.

Dion Brooks is a school bus driver in Atlanta. At a press conference Thursday, he described his experience from last week’s snowjam.

“Once they released the kids we went ahead and tried to get the kids home. Our last student was dropped off at 1 a.m. We didn’t get our last bus back to the base until 3:45 a.m.  I was there the entire time,” said Brooks.

“This isn’t something that I do for the money. I do it because I love my kids. Those kids, when they get on the bus, they become my child,” said Brooks.

He gets paid for nine months of the year and collects unemployment benefits during the summer. However, under House Bill 714, Brooks would be barred from collecting those benefits.

“I’ll do anything for my kids but I still have to make sure that my family can survive and without unemployment over the summertime it’s a strong chance that we won’t be able to,” said Brooks.

In recent years, schools – facing tight budgets and hoping to cut costs – have contracted out some services, like bus driving and cafeteria work. Instead of offering full-year salaries, these privately contracted companies hire workers only for the length of the school year – nine months. Then during the summer, workers are encouraged to file for unemployment benefits, even when it’s expected they’ll return the following school year.

HB 714’s sponsor, Rep. Mark Hamilton, R-Cumming, wants to send a message to employers that rely on the unemployment system to supplement what they pay their employees.

At a committee meeting Thursday, labor groups pushed an amendment seeking to refocus the bill solely to the offending employers, essentially by making them pay more into the unemployment system.

DeLane Adams of the Georgia AFL-CIO argues employers would then be more likely to offer workers full-time pay.

“It’s about making sure that we’re not punishing the workers and actually punishing the people who are committing these abuses which are the employers,” said Adams.

The committee, however, rejected the amendment. Hamilton worried the necessary tax code changes would bring unintended consequences for other businesses. He contends the bill in its current form will effectively end the abuse.

“I say to the school bus drivers I’m sorry you have been put in this situation. I blame the employers.” said Hamilton.

The committee ultimately approved the bill 6-3. It now heads to the full House for a vote.