Several state Senators exchanged heated words Friday over a bill that passed out of a Senate committee Thursday. The bill would ban abortion coverage from state employee insurance policies. It would also prohibit abortion coverage for Georgians participating in a healthcare exchange run by the federal government under the Affordable Care Act. 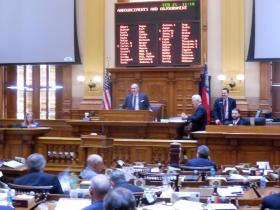 Six Republican Senators are sponsoring the bill. Democratic Senator Valencia Seay said the bill is a further attack by the GOP on the reproductive rights of women. “We should be focused on the economy, on job creation and preventive health initiatives instead of measures that would eliminate health insurance benefits for women.”

But Republican Senator Josh McKoon said there is not a war on women being waged in the U.S. or in Georgia but an attack on people of faith. He said the bill is needed to prevent taxpayer money from being used for abortion services. “The idea that in this state we are taking dollars from Georgians and using it for abortion services, that many find morally repugnant and reprehensible is terrible, and it’s something that we should be in a rush, we should be doing everything we can to stop that from happening.”

Planned Parenthood Southeast is opposed to the legislation and is in the process of researching whether the bill would violate the Constitution.

If the bill is approved, and there are any lawsuits filed against it, the legislation gives bill sponsors the right to intervene in any constitutional challenges.

The bill makes an exception for pregnant women who face a medical emergency such as death.

Last year, the state’s Department of Community Health voted to restrict state employee insurance policies from covering abortions. Governor Nathan Deal backed that vote. If the legislation gains approval it would put that change into state law. The full Senate could vote next week.