Georgia’s Stephen C. Foster State Park is in the middle of the Okefenokee Swamp. It’s very remote, and that means at night it is very dark. So dark, it’s now being recognized as one of the best places in the country to see the night sky.

The stars are so bright, they reflect off the surface of the water, like the moon would if it was up.

“It’s really pretty mesmerizing when the water is so still, it’s like glass here,” said Josh Snead, an interpretive ranger at the park. “You get the slight silhouettes of the cypress and you get the planets and the stars reflecting down here in the water.”

We had paddled out onto a lake in the park. The Milky Way stretched overhead. Venus and Mars were bright; they reflected in the lake, too. When we turned our headlamps on, orange spots glowed on the shore. Those were alligator’s eyes, reflecting the light back at us.

“There are times when you’ll shine your light and just see so many eyes,” said Snead.

The Okefenokee Swamp is at the south end of Georgia. It’s full of alligators, birds, turtles and cypress trees with their knees sticking up out of the water and Spanish moss hanging down from their branches. Most of the swamp is protected as a National Wildlife Refuge, which means Stephen C. Foster State Park is pretty much in the middle of nowhere.

In November, the International Dark Sky Association officially named this place an International Dark Sky Park. To make that happen, the staff here got rid of some street lights and put motion detectors at the doors to the cottages so that porch lights don’t get left on all night. Those efforts earned them the darkest designation.

“We’re the first dark sky park in Georgia,” said Snead. “Gold tier, which is kind of up on the level of places like Canyonlands or Big Bend National Park, western parks that a lot of people associate with stars.”

Snead says stars are definitely an attraction for visitors who want to take long-exposure pictures, or just want to see the Milky Way. 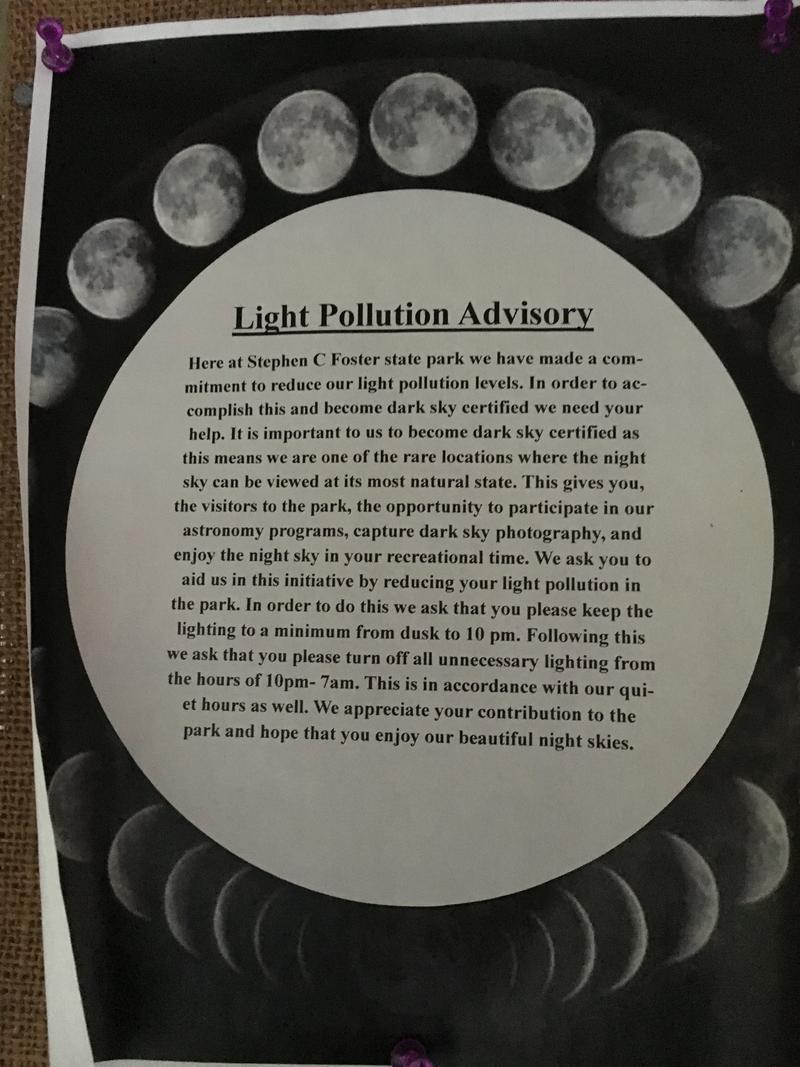 “They come here and they’ll be from Atlanta and they’ll talk about when they were kids and went out with dads or their granddads and they’d go look at the stars, and talk about how they haven’t seen stars like that since those days,” he said.

Or, maybe they’ve never seen them.

Which is poignant, since the Milky Way is always up there, it’s just that our own lights block it from view.

“We have these precious spaces that are remaining that we can see the sky the way people used to see the sky,” he said. “Our ancestors and voyagers and Native Americans and everybody, 100 to 200 years ago they would have been looking at skies like this. Navigating from them and telling the seasons from them and things like that.”

Snead said part of the goal of the “Dark Sky” designation is to raise awareness about light pollution.

This park is great for amateur astronomers, Snead said, who can see even more with telescopes here than they could closer to civilization, and for people who just want to space out.

“One of the best ways to come out here is to lay down and look up at the sky with no lights and just let your eyes adjust. And you’ll slowly gather more and more of the light out there and you’ll see more and more of the stars in more detail,” he said. “And maybe catch a few meteors too. You don’t need a meteor shower going on to see them.”

Stephen C. Foster State Park is celebrating its new “Dark Sky” status with a free astronomy program on Dec. 10. The sky there is dark and full of stars every night, except when it’s cloudy, or the moon is too bright.