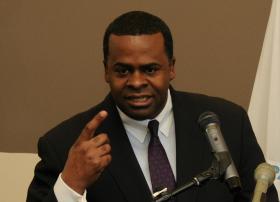 The lone exception occurred after a question about whether the final package would be a legally-binding “agreement,” or a non-binding “plan.”

“What is so frightening about the word ‘agreement’?” asked Rev. Anthony Motley of the Lindsay Street Baptist Church, located in the English Avenue neighborhood. “We want an agreement, Mr. Mayor…We don’t want a plan.”

A heated exchange between Reed and Motley ensued.

“You don’t have to tell me who votes. I know who votes. That’s why I’m sitting in this chair and you’re not,” said Reed.

“You make cheap personal shots at people and that’s not becoming of a mayor,” said Motley.

They went back and forth derisively, neither relenting until the chair of the committee, Councilman Michael Julian Bond, was forced to step in and calm them down.

After the altercation, Reed said his intention had always been to end with an agreement.

“The better path was to come up with a plan that had community buy-in through meetings like this and once a plan was finished then we would convert the community development plan into an agreement,” said Reed.

Yvonne Jones hopes that’s true. If it’s merely a plan, the chair of the neighborhood planning unit for Vine City and English Avenue fears small neighborhood groups will lose control of the process.

“It’s our community and so if you don’t allow smaller nonprofits or developers to work with the larger ones then they’ll be someone imposing their ideas onto our community and their development concepts and that’s what we don’t want,” said Jones.

At the meeting, Reed ensured a level playing field, saying the city would help small neighborhood groups apply for funds and consider relaxing certain application standards so they can compete against larger groups.

Jones welcomed Reed’s remarks and said they gave her “some optimism.”

The committee will meet again September 4th. The process is scheduled to wrap up in October.