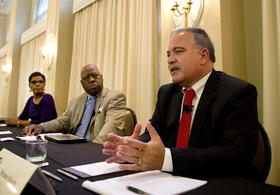 Among the issues facing new state schools superintendent Richard Woods is an effort to make his position appointed, rather than elected.

Woods, who officially started the job this month, says Georgians shouldn’t give up the right to vote for a schools chief.

“You’re looking at really surrendering your rights or your voice to express your opinions as the people of Georgia. That means you’re losing liberty and once you surrender your liberty it’s probably lost forever,” said Woods.

Several lawmakers on both sides of the aisle want the governor or the school board to simply appoint the position. It’s how 37 other states currently operate.

Rep. Mary Margaret Oliver, D-Decatur, backs the idea because, as she points out, the position is largely an administrative job that doesn’t set policy.

“It creates an additional political soapbox but doesn’t create real opportunity in terms of authority to change educational policy so it really doesn’t serve our students to have an elected school superintendent,” said Oliver.

The change would require a constitutional amendment and a statewide referendum.