Fulton County could be on a collision course to court after passing a 2014 budget yesterday that includes a 15 percent tax increase. Several state lawmakers in the Fulton Republican delegation say if county commissioners finalize the tax increase later this year, they are breaking a state law capping Fulton’s property taxes.

“That law, which I authored last year, was passed and it is based on a local constitutional amendment that was passed in the 50s, reauthorized in the 80s, and unequivocally, definitively gives the legislature the authority to stop the Fulton County Commission from raising its millage rate.”

Representative Jones is currently in talks with legislative legal counsel and plans to speak with Georgia Attorney General Sam Olens. She says if county commissioners finalize the millage rate later this year , there will be consequences.

Republican State Senator John Albers also says Fulton County should not move forward with the tax increase. He says if the county does approve the increase, “We’ll take any actions necessary, including going to court, to make sure Fulton County is a responsible government.”

But, as Fulton Commission Chairman John Eaves told WABE’s Denis O’Hayer, the commission made cuts to its budget and needed the tax increase to maintain county services. Eaves says the state legislature intervened at an unprecedented level and the county is on firm legal ground. 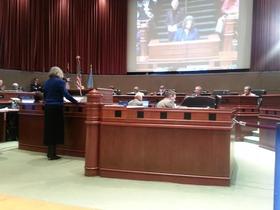 “If it has to come down to some sort of legal fight, we’ll do it. Our sovereignty as a local jurisdiction is at stake, and we’re not going to allow state legislators who are a step removed from local residents to dictate what we’re going to do.”

The bill to cap the county’s property tax rate was part of an effort by North Fulton lawmakers hoping to reduce the thumbprint of Fulton County and recreate a North Milton County. The Georgia Attorney General’s office declined to comment on the matter.